Tsipras, the Keffiyeh Scarf and Cooperation with Israel 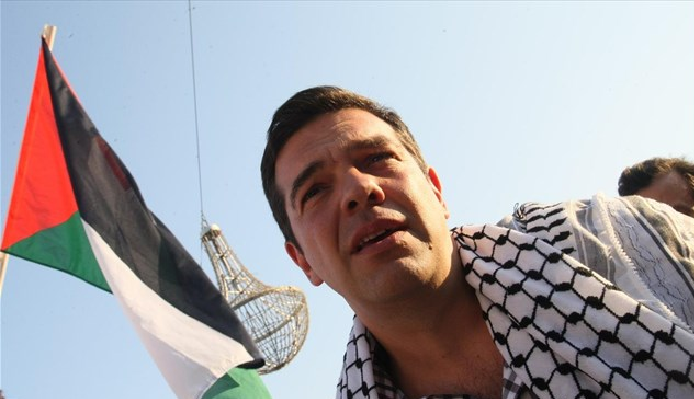 It was July 2014, only months before Alexis Tsipras and SYRIZA were elected as the first ever leftist government in Greece.
It was just another day in the Greek leftist lifestyle that demanded politicians and people  demonstrate against yet another Israeli attack in the Gaza strip. As the leader of the party that was gaining momentum after Greeks were devastated by the economic crisis, it was his duty to show that he supported the downtrodden, the less fortunate, the “people”.
On that day, Tsipras donned his well-pressed keffiyeh — the Palestinian scarf — and went to Syntagma Square to shout slogans against the “Israeli killers”, the “imperialists” along with his fellow SYRIZA members and voters.
It was a good show to win some extra votes, because, after all, the end justifies the means.
The 41-year-old party leader wanted to tear down the post-junta political system and bring in “the new” — a leftist government for the people, by the people.
No one really knows if Alexis Tsipras truly meant all those holier-than-thou leftist declarations he made. No one knows if he felt true compassion for the Palestinian victims.
Most probably he did. After all, he was a naive youth coming from an upper-middle-class family and as a teenage rebel he joined the Greek Communist Party’s youth wing. It was his duty to support the Palestinians.
Tsipras became well-versed in Marxist-Leninist theories like a good KNE kid and later in life he found out that he could make a living in politics without having to do real work.
As a youth subjected to KKE doctrine, his ideology remained the same in adulthood. When circumstances and his clever propaganda techniques brought him to power a few months after the demonstration, the young leftist soon discovered that power is sweeter than ideology, and the life of a prime minister is far superior to that of a man who gets his hands dirty fighting for the rights of the poor.


So, four years later, a different, completely changed Tsipras was grinning like a schoolboy who got his A grades when posing with Israeli Prime Minister Benjamin Netanyahu after Greece, Israel and Cyprus signed another economic cooperation deal. This was less than a week ago and the three state leaders were meeting for a fourth time.
But Monday was another bloody day in the ongoing conflict between Israel and the Palestinians. The Israeli army killed over 50 people and injured more than 2,700 who were demonstrating in the Gaza Strip against the transfer of the U.S. Embassy to Jerusalem.
Many Greeks demonstrated to express outrage at the killing of so many people. Yet, the country’s Foreign Ministry issued a lukewarm statement that is light years away from the venomous attacks against the opposition on far less-important issues:
“The circumstances call for self-restraint in order to avoid further escalation and new victims… The foreign ministry watches with dismay and particular concern the tragic loss of dozens of human lives, including children, as well as hundreds of people who were injured by Israeli fire for demonstrating in the Gaza Strip.”
“Israel must respect the right of peaceful protest and avoid the use of disproportionate violence. For their part, Hamas and those who organize protest demonstrations in the Gaza Strip must guarantee the peaceful character of these protests,” the Greek foreign ministry statement added.
In a laconic statement, Greek Parliament Speaker Nikos Voutsis said: “The House condemns the new massacre of Palestinians by Israeli troops.”
Government spokesperson Dimitris Tzanakopoulos was equally stingy with words and emotion: “We express our horror for all those deaths and the disproportionate and unilateral reaction of Israel.”
What changed?
What changed over these four years to make the leftist administration react so passively to the massacre of Palestinians? What transpired to make SYRIZA turn into a party that enforces policies which are more neoliberal than conservative governments even dared to propose? Why have the words “Left” and “leftist” disappeared from Tsipras’ vocabulary?
The answer is power. In the last four years Tsipras received the honors of a head of state numerous times; he was invited in the White House twice; he made official visits to many countries; he traveled across the globe with the presidential airplane; he even went to the funeral of Fidel Castro in Cuba with it.
At the same time, it was four years of learning economics the hard way. It was four years in the real world, outside the party cocoon where every problem is solved with a clever leftist slogan. Yet, all that was washed away by the sweet nectar of power.
At the time of writing, Tuesday afternoon, Tsipras’ former comrades in Popular Unity and other leftist parties are preparing to demonstrate at Syntagma Square against the massacre of Palestinians. Tsipras will be absent, and so will SYRIZA.
But the picture of a smiling Tsipras with the Palestinian keffiyeh four years ago has already gone viral in Greece, as a reminder of what happens to rebels when they find themselves in the position of what they were rebelling against. It is such ‘before and after’ pictures that will haunt the Greek prime minister until the next election.