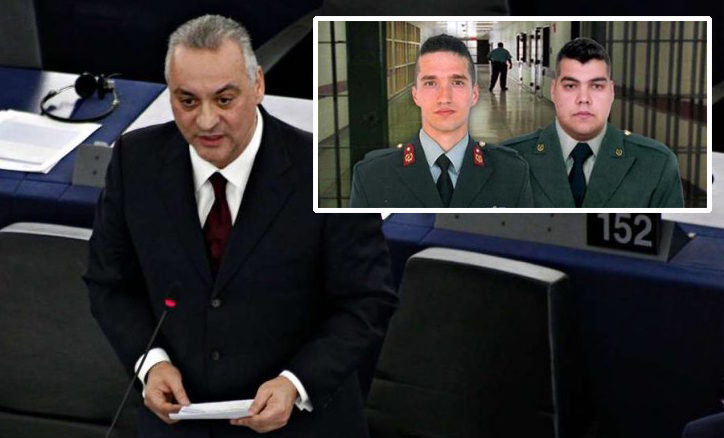 New Democracy MEP Manolis Kefaloyiannis on Monday visited the two Greek soldiers who have been jailed in Edirne since March 1 and conveyed a message of comfort and hope for their unlawful detention.
“I conveyed to the two Greek army officers, Angelos Mitretodis and Dimitris Koutlatzis, the unlimited love of an entire nation,” Kefaloyiannis told reporters after his visit.
The MEP also said “I have conveyed to them, the unwavering support of the European Parliament, which, by virtue of its resolution, demands, with the unanimity of all its political forces, their immediate release”.
Kefaloyiannis stressed that “the release of the two Greek soldiers, is a matter of national and European priority. Angelos Mitretodis and Dimitris Kouklatzis guarded European borders. They are European Citizens. The European Union calls for their immediate release.”
Moreover, Kefaloyiannis briefed the President of New Democracy Kyriakos Mitsotakis, who, since March 22, at the European People’s Party Summit, had first raised the issue of the immediate release of the two Greek officers.
“In Angelos and Dimitris we all see our siblings, our children, our grandchildren. We are anxiously awaiting for their immediate release. To return to their homes. To their own people,” the Cretan MEP stressed, dedicating to both men and a Cretan mantinada:
“Nothing can humiliate a man who has grown with good principles.”