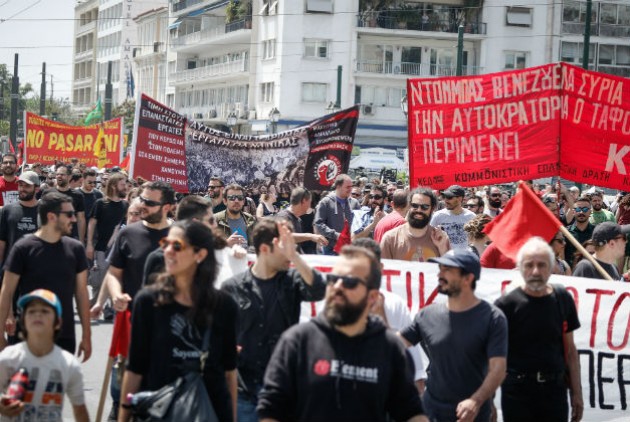 Greece’s largest trade union federations held a strike rally at Klafthmonos Square in central Athens on Tuesday to mark the May Day celebration with “Democracy, Justice, Equality, Freedom, Peace, Labor Rights” as their slogan.
The rally was organised by the General Confederation of Workers of Greece (GSEE), the civil servants’ union federation ADEDY and the Athens Labor Centre (EKA).
Speakers at the rally sent a message for continued labor action against the erosion of labor rights and privileges under austerity bailout programs and the rally was followed by a march to the Greek Parliament.
The Communist Party of Greece-affiliated labor movement PAME held a separate rally and marched to the U.S. Embassy.
Anarchists, police fight during May Day rally
Around 2:00pm, a group of anarchists broke away from the May Day rally and became embroiled with a police unit outside the historic building of the National Technical University of Athens.
Rocks and Molotov cocktails were thrown at police; barriers were thrown up on the adjacent Stournari Street with trash containers set on fire.
The anarchists continued to throw objects and petrol bombs at police from inside the NTUA building for hours.