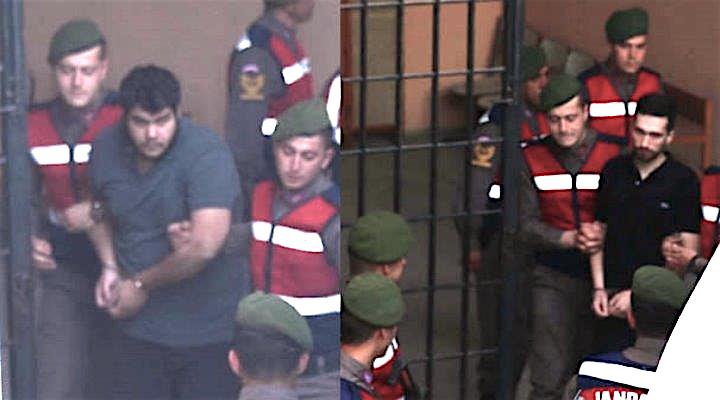 A Turkish court has rejected for a third time the appeal launched by the defense team of the two Greek soldiers held in Edirne for their release on bail.
According to Turkish media, the judge rejected the appeal claiming that the soldiers did not have permanent residency and therefore, they can run away if they are released.
Sgt Dimitris Kouklatzis, aged 27, and Lt Angelos Mitretodis, 25, were arrested after being found in a “forbidden military zone” by Turkish authorities in early March. They have been detained in a high-security jail pending trial in the border town of Edirne ever since.
This was the third time that the court dismissed an appeal for their release.
On Sunday, Turkey’s president, Recep Tayyip Erdogan, proposed that two Greek soldiers be exchanged for eight Turkish officers who have sought asylum in Greece.
“They asked us to give the two Greek soldiers back. And we told them there are eight soldiers who tried to make a coup. First, you have to give them to us. If you give them to us then we can put the others on the table. Because they crossed the border,” Erdogan was quoted as saying.
Erdogan’s proposal was dismissed by Athens as unacceptable.
Meanwhile in Strasbourg, the Council of Europe’s parliamentary assembly (PACE) has called for the immediate release of the two Greek soldiers.
During the assembly’s spring summit, a statement was issued calling for the two soldiers to be freed and for respect for human rights and rule of law.
The initiative was signed by a 13-strong Greek delegation and a large number of MPs from member states of the European Council across the political spectrum.