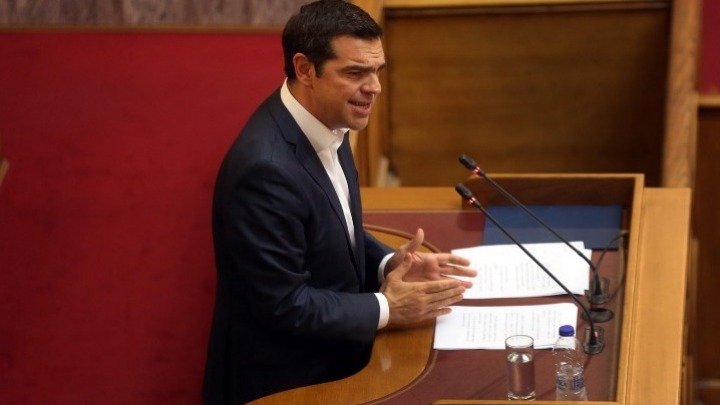 Greece’s PM Alexis Tsipras reiterated Monday that the country will make a “clean exit” from the bailout era and the strict supervision of its creditors by August.
Speaking at SYRIZA’s parliamentary group he underlined that the exit from the bailouts will mark the country’s return to normality. He also dismissed concerns that Greece may need a a precautionary credit line after its bailout exit.
“There is neither a bailout extension nor a fake exit, a non-clean or a dirty exit – call it anything you want – in sight,” Tsipras told his lawmakers.
“There is a clear completion (of the program), a clean exit,” he said.
Tsipras cautioned however that the clean exit does not mean that all the problems are solved or that the government won’t still have serious issues to deal with, nor that Greece won’t have to meet fiscal targets and service its debt.
However, he noted, “it is quite different to have specific goals and a minimum of control over your European obligations than to have to co-govern with the troika.”
Greece will officially present its own post-bailout policy plan at a meeting of eurozone finance ministers this week, Tsipras said adding that he hoped that negotiations on the terms of the post-bailout period would be concluded by the end of June.

No trade-off with Turkey
Tsipras also ruled out any trade-off with Turkey in efforts to secure the release of two detained Greek soldiers and said Ankara appeared to be moving further away from Europe.
“Turkey looks like a country … at risk of losing its orientation and moving away from its European targets,” Tsipras said.
He added there could be no quid pro quo in the efforts to secure the release of the Greek soldiers.
“We reject, in the most categorical manner, unacceptable preconditions,” he said.

Retail shops in most parts of Greece reopened their doors to customers on Monday, as the government announced support measures for businesses
Greece