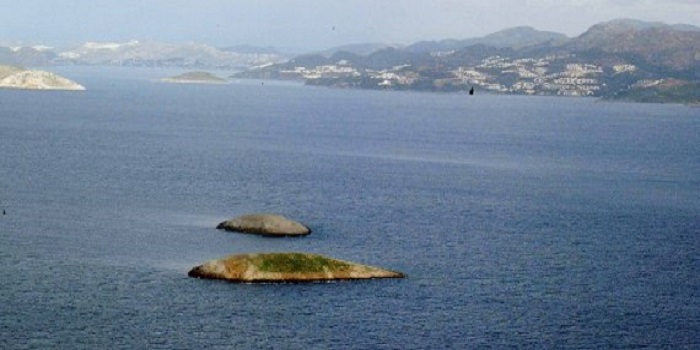 Ankara has issued a list of 152 Greek islets, disputing their sovereignty and the international treaties that have established the status quo in the Aegean.
The list is called EGAYDAAK, the acronym for “Egemenligi Anlasmalarla Yunanistan’a Devredilmemis Ada Adacıkve Kayaliklar”, meaning “islands, islets and rocky islets the sovereignty of which was not granted to Greece under international agreements and treaties”.
The list includes more than 20 islet formations belonging to the Fournoi Complex, a cluster of uninhabited islets between Ikaria, Samos and Patmos.
Turkey’s aim is to bring Greece to the table and revise the 1923 Treaty of Lausanne and the 1947 Treaty of Paris, the two international agreements that granted the islets to Greece, establishing the sea borders between the two countries in the Aegean.
The issue has been brought up again after Turkish Prime Minister Binali Yildirim said that the Turkish coast guard removed a Greek flag on the Mikros Anthropofas rocky formation. However, new photos show the flag is still flying.
The two Anthropofas islets are between Ikaria, Lemnos, Samothraki, Lesvos, Chios and Samos; therefore they are included in Article 12 of the Treaty of Lausanne that says all the above belong to Greece.
Turkey, however, claims that since the islets and rocky formations are not specifically listed by name in the two international treaties, their sovereignty is contestable.
The EGAYDAAK list is comprised of the Zourafas complex and the Oinousses complex of islets in the North Aegean; the Kalogeroi complex of islets in the Central Aegean; the Fournoi complex in the East Aegean; the Arkoi, Agathonissi, Farmakonissi, SE Nissyros, SA Astpalea, NW Karpathos complexes of islets in the South Aegean; and the Cretan Sea complex of islets.