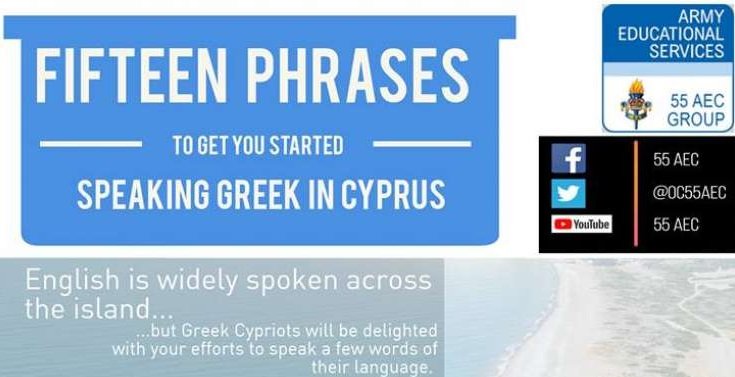 Britain’s armed forces are encouraging their soldiers and their families in Cyprus to pick up a little of the local lingo.

A new video posted by the Army Education Centre helps those stationed there with some basic words and phrases in Greek, and is encouraging the U.K. troops to try their hand at other languages.

“If there is an operational requirement within your unit then courses are available.

“It’s done on a case by case basis and if there is a good justification then we can jack something up with a tutor.

“We can deliver a three or five-day course just for basic meetings and greetings or there is a more intensive five-week course which could offer a military language qualification that you can put on JPA.”

“You can do private study if you want and there are resources specifically focused on Greek while you’re in Cyprus.

“So get yourself down to the library in Episkopi, Akrotiri, Dhekelia, Ay Nik or Nicosia. There are audiobooks, online programmes.”

In 1960 the U.K. retained what it calls two Sovereign Base Areas in Akrotiri and Dhekelia. British Forces Cyprus uses the island as a forward hub for its operations in the Middle East.

Greece is pushing its EU partners to approve Covid-19 vaccine certificates that would open travel throughout Europe, the Greek tourism minister said.
Animals