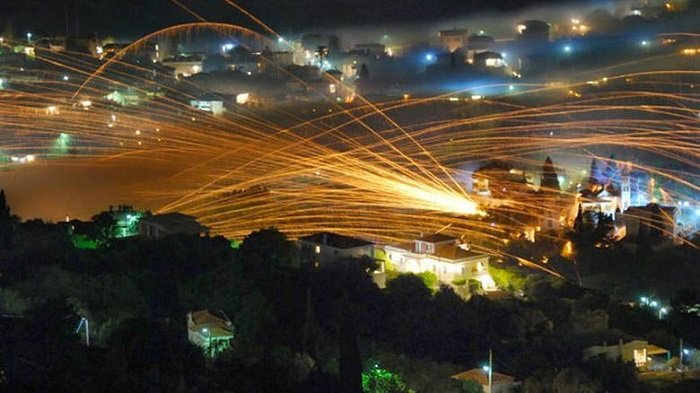 The rocket war, one of the most beautiful and dangerous Easter spectacles in Greece, will be revived on Saturday evening on the island of Chios.
Groups at the village of Vrodados say they have struck an agreement with the local authority, the church and the police to continue with the 200-year-old custom, albeit on a smaller scale.
The custom involves two opposing parishes of the village spending the evening just before Orthodox Easter Sunday firing thousands of homemade rockets at each other’s church — while the more pious among them attend a service inside.
The two rival parishes are St. Mark’s and Panaghia Erythiani (“Red Madonna”), the respective churches built on two hilltops about 400 meters from each other.
Traditionally, the objective is to hit the bell tower of the church of the other side. The rockets are wooden sticks loaded with an explosive mixture containing gunpowder and launched from grooved platforms.
The church buildings themselves and the nearby buildings have to be extensively boarded up and protected with metal sheets and mesh for the occasion.
Many locals are unhappy at the explosive nature of the custom, but it is a source of significant tourist revenue for the area.
This year it was agreed that a maximum of 10,000 rockets will be used and the distance between the rival launching pads will be bigger. Also, a verbal agreement was reached not to target the properties that lie in the middle.