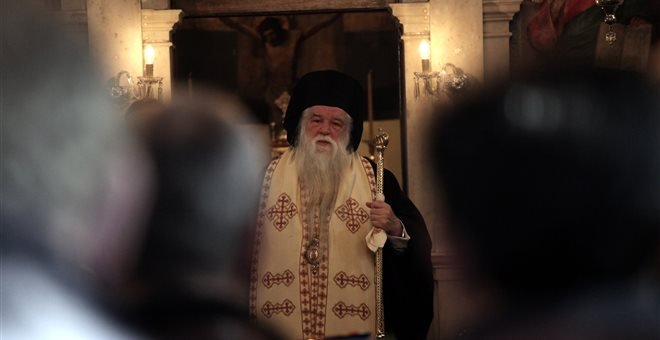 Metropolitan of Kalavryta and Aigialeia Amvrosios launched a new attack against Justice Minister Stavros Kontonis after the appeal against the court decision that found Amvrosios not guilty of hate speech.
The Metropolitan was recently acquitted after a 2015 suit against him by LGBT groups for comments against homosexuals. His acquittal had caused an uproar since Amvrosios; through his blog, had called on all Orthodox Christians to spit on gays whenever they see them.
Now Amvrosios accuses the justice minister for intervening to change court decisions and being a “protector of gays”. He further accuses him of “infecting the Honored Body of Judges”. At the same time; again in his personal blog, he insists that people should spit on gays.
“Please accept my wholehearted congratulations! Your public intervention in the work of ‘independent’ Justice has brought the effect you desired!” the Metropolitan wrote in his blog, addressing Kontonis. “As a result of the published appeal, the decision of the Aigio Court was annulled (judgment of March 15, 2018)”
“You became the de facto gay protector… By Your Unlawful Interventions You Infect the Honored Body of Judges!” he wrote further.
In his open letter to the justice minister Amvrosios refers to the recent acquittal of Defense Minister Panos Kammenos by a Thessaloniki court. Kammenos was found not guilty for urging Halkidiki residents to lynch a local governor over some wrongdoing. Amvrosios accuses Kontonis for double standards.
“The words ‘lynch him’ uttered loudly was much more an incitement to violence, since lynching includes physical violence and it also referred to a particular person! On the contrary, we wrote ‘spit on them’, which has only symbolic, meaning ‘despise them’, and our incitement was not intended to be a SPECIFIC OBJECTIVE, but it was general and had a metaphorical meaning!” Amvrosios further wrote.
The Amvrosios text continues with the incidents that took place after his acquittal: “Our adversaries after March 15 committed the following offenses: They attacked people here in Aigio, they broke windows in the court house, they wrote insulting slogans against us on the walls of Aigio, they tore down the Greek flag and raised their own, the gay flag, they desecrated churches in Aigio, Athens and elsewhere.
I wonder: Was the ‘spit on them’ much heavier than all this?”
And the posted text concludes: “Greek Brothers, look who who are governing us!”