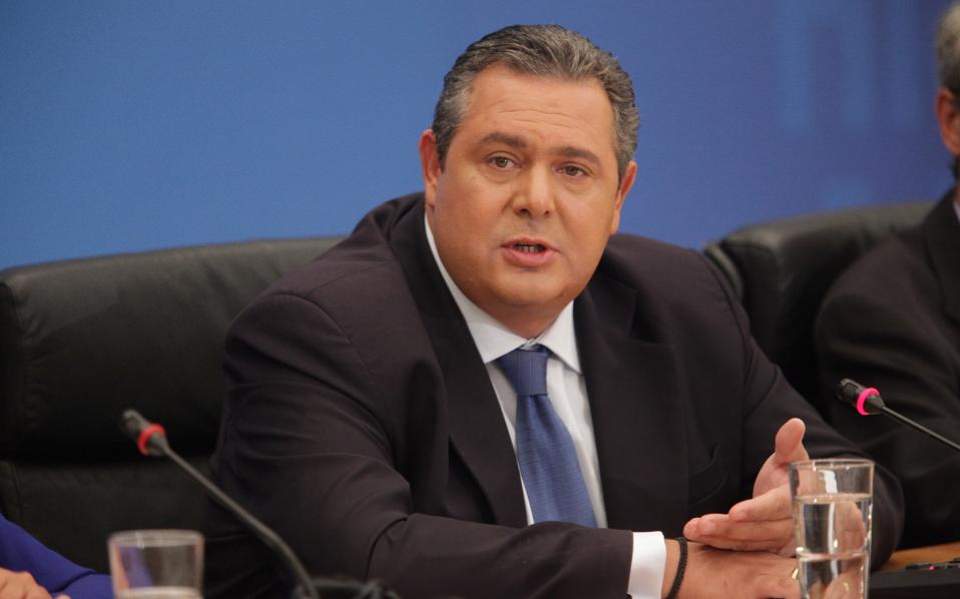 The assessment that the detainment of the two Greek junior army officers may last for 15 years was expressed by Defense Minister Panos Kammenos on Monday.
“In a country where justice operates under the orders of the Sultan the case may drag on for 15 years,” Kammenos told reporters, also expressing the suspicion that the capture of the two soldiers might have been orchestrated by Turkey. He noted that such routine cases in the borders between the two countries are usually resolved in five minutes.
The defense minister said that there are no actual charges filed against the two men and likened the incident to the 1978 film “Midnight Express”, that described the horrific conditions of Turkish prisons and cases of prisoners who kept having false charges thrown at them.
Regarding Sunday’s statement from Maximos Mansion in which Turkish President Recep Tayyip Erdogan was called a “Sultan”, Kammenos said he agrees with the description. At the same time he questioned the Turkish president’s claim that Prime Minister Alexis Tsipras promised him to return the eight Turkish soldiers who sought asylum in Greece, saying that Erdogan is an unreliable interlocutor.
Also, when asked if there is a direct channel of communication between Athens and Ankara, the defense minister said that this is not possible because the Turkish president is “mad” and does not hesitate to provoke even the United States.
Regarding the possibility of a military engagement in the Aegean, Kammenos commented that the Turkish army is not in a good shape at the moment. He said that 80 percent of the armored vehicles of the Turkish armed forces are dismantled and 60 percent of their military staff are out of the army.
“We do not try to reassure the Greek people at all. We will not take the bait in their attempt to create a military engagement. If they violate national territory, we will  respond as we should. But we will not play the game of tension that they want to create,” Kammenos said.
New Democracy criticizes Kammenos’ comments
Main opposition New Democracy commented caustically on Kammenos’ statements about Turkey and President Erdogan.
“Mr. Kammenos’ delirium is not worthy of comment. But then again he is not worthy  himself to be Minister of National Defense,” the conservative party statement said.
To Potami leader Stavros Theodorakis also made negative comments about Kammenos’ statements: “Mr Kammenos is Mr Tsipras’ problem, he’s not my problem, and I fear he is a problem for the country, because the things he does do not serve national interest. With his comments and exaggerations, whether he is dressed in an army uniform or a politician’s suit, he rather creates problems than solves them, especially now, at a difficult time for the country.”