GRNews
GreekReporter.comGreek NewsDiplomacyAthens Responds to Turkey: Greece is Not Governed by a Sultan

Athens Responds to Turkey: Greece is Not Governed by a Sultan 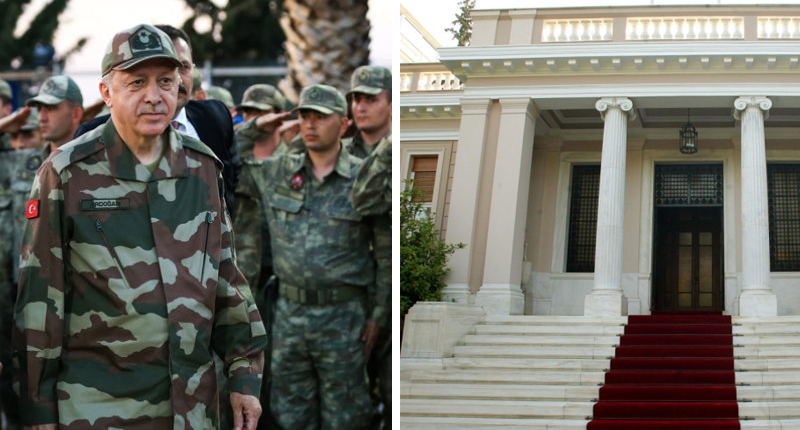 Maximos Mansion has issued a strongly-worded statement in response to comments made by Turkish President Recep Tayyip Erdogan about the two Greek soldiers held in Turkey and the eight Turkish army officers who sought asylum in Greece.
The Turkish president accused Greece and the EU of putting pressure on Ankara to release the two Greek junior army officers who crossed the border with Turkey accidentally and have been held in Erdine for a month.
Erdogan argued that Greece and Europe did not react as strongly when eight Turkish army officers who allegedly participated in the July 2016 failed coup attempt in the neighboring country sought asylum in Greece. Greek courts have ruled against their extradition despite Turkey‘s demands.
According to Erdogan, in July 2016 Greek Prime Minister Alexis Tsipras had promised him that he would return the Turkish military men to their country soon.
“You know, certain people tried to kill me and escaped to Greece by helicopter,” Erdogan said. “After that, Mr Tsipras, when I spoke to him, told me that the matter would be dealt within 10 to 15 days.”
“Months have passed, years have passed, and he (Tsipras) still hasn’t dealt with it,” Erdogan said.
Greece’s Supreme Court ruled that the eight former military men should not be extradited because there are serious indications that they would not receive a fair trial and would face the risk of torture and even death.
“You did nothing about those terrorists, you didn’t say anything about them to Mr Tsipras,” Erdogan said addressing European Union officials.
The Greek prime minister’s office replied to the Turkish president using rather scathing words. The statement reads that Greece respects the law “and has a prime minister who respects and acknowledges the procedures of Greek justice, not a Sultan who would be able to issue promises on [judicial] decisions.”
“If the Turkish president had something to say about the case of the eight Turkish solders, he had the chance to say it both in private to the Greek prime minister and publicly during his recent visit to Athens. Today he chooses to continue an incomprehensibly slippery road of provocative attacks, counterbalancing two entirely dissimilar cases,” the statement read.
“If he (Erdogan) wishes to be the head of a state governed by law, he has to give explanations on the reason why Turkey is still keeping in custody two Greek military officers who have done nothing more than crossing into Turkish soil by a few meters while they were searching for illegal (migrant) crossings,” the statement further added.