GRNews
GreekReporter.comGreeceErdogan: We will Not Back Down from Our Rights

Erdogan: We will Not Back Down from Our Rights 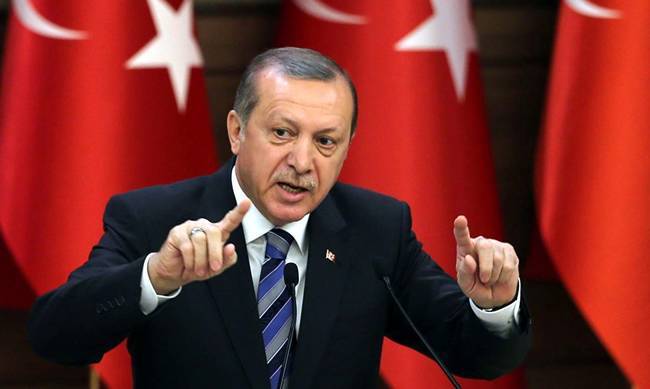 Turkey will not back down from its rights and interests said Turkish President Recep Tayyip Erdogan after a meeting of Turkey’s Security Council on Wednesday.
After a four-and-a-half hour session in Ankara, the country’s Security Council decided to not heed to the EU warnings about Turkey’s provocative behavior against Greece in the Aegean and in Cyprus’ exclusive economic zone.
Turkey claims that certain Greek islands in the Eastern Aegean belong to Turkey and challenge the Lausanne Treaty. At the same time, they don’t recognize Cyprus’ right to explore for gas and oil and claim that Turkish Cypriots of Cyprus’ northern occupied part have equal rights to the EEZ.
On Monday, Erdogan met with European Commission President Jean-Claude Juncker, European Council President Donald Tusk and Bulgarian Prime Minister Boyko Borisov in Varna, Bulgaria and discussed issues pertaining to the Mediterranean. In particular they talked about the refugee issue, Turkey’s accession to the European Union, and Turkey’s behavior towards EU Member States Greece and Cyprus.
Juncker and Tusk said that Turkey’s challenging the sovereignty of certain Greek islands in the Aegean and its blocking of exploratory ships in Cyprus’ EEZ do not constitute good neighborly behavior for a country that wants to be part of the EU.
During the meeting, Turkish officials said that it is Greece’s attitude that does not constitute good neighborly behavior, according to Turkish media. It was decided that Turkey will continue to protect its interests and defend its rights at any cost.
Regarding Turkish military operations in northern Syria, the country’s Security Council also decided that they should continue unabated.