GRNews
GreekReporter.comGreeceGreek Superleague Suspension Likely to Continue for Another Week

Greek Superleague Suspension Likely to Continue for Another Week 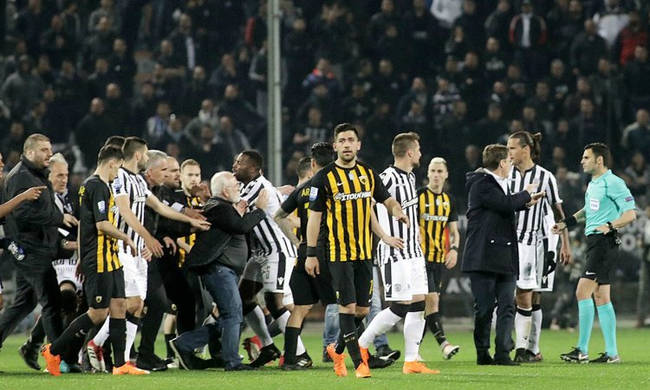 The suspension of Greece’s Superleague is likely to continue through next week as one of the 16 clubs did not agree with the rule changes proposed by the Greek government.
Deputy Sports Minister Giorgos Vasileiadis proposed four new measures to apply for next season. If all clubs agreed to the new rules, then the championship would resume on the weekend of March 31-April 1.
However, Olympiacos, one of Greece’s biggest football clubs, refused to sign the new agreement, putting the whole procedure on hold, Vasileiadis said on Sport FM radio.
A unanimous vote was needed by Friday so that the Superleague games would resume next weekend. The 16 Superleague clubs have called their own meeting for Monday.

There are four new measures that football clubs have been asked to agree on, including relegation if fans, players or club officials are found guilty of violent acts or inciting violence more than three times.
Greece’s Superleague was suspended last week after PAOK owner Ivan Savvidis stormed the pitch carrying a holstered handgun and tried to approach the referee during his team’s game against AEK Athens.