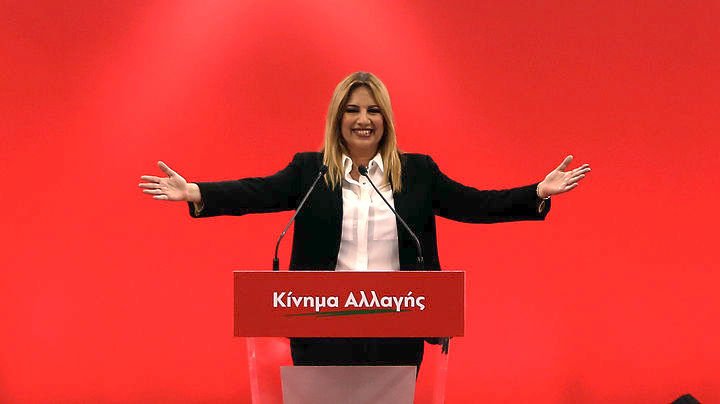 The Movement for Change (MFC) will have an autonomous political role towards SYRIZA and New Democracy, PASOK leader and interim chair of the new party said in a speech at the MFC’s founding congress on Friday.
Fofi Gennimata said the party will claim a defining role in forming a progressive government for the country and send a message to all the political entities forming the coalition that efforts must now concentrate on moving forward.
“We want the power to crush the bad replica of partisanship created by SYRIZA-ANEL and New Democracy and change political correlations,” she said and called on the public to support the new party.
“We move forward with an autonomous word and strategy. We are not caught up in divisive ‘fronts’ […] No agreement is written with indelible ink but on the other hand changes are not made in a reckless way”, she added.
During a guest speech at the congress on Friday, New Democracy leader Kyriakos Mitsotakis called for collaboration among parties on national issues.
“New Democracy will seek a wide general consensus immediately after the next elections for all serious issues Greece faces,” Mitsotakis said.
Governing SYRIZA was represented at the congress by Deputy Prime Minister Yannis Dragasakis who said the party always sought to become a constellation of different political entities, and recalled past collaboration of the Left with PASOK.
“Such a coalition of political and social forces can assume the great task of reconstructing Greece,” he said, “and this constitutes a sincere response of strategic nature.”
(Source: AMNA)