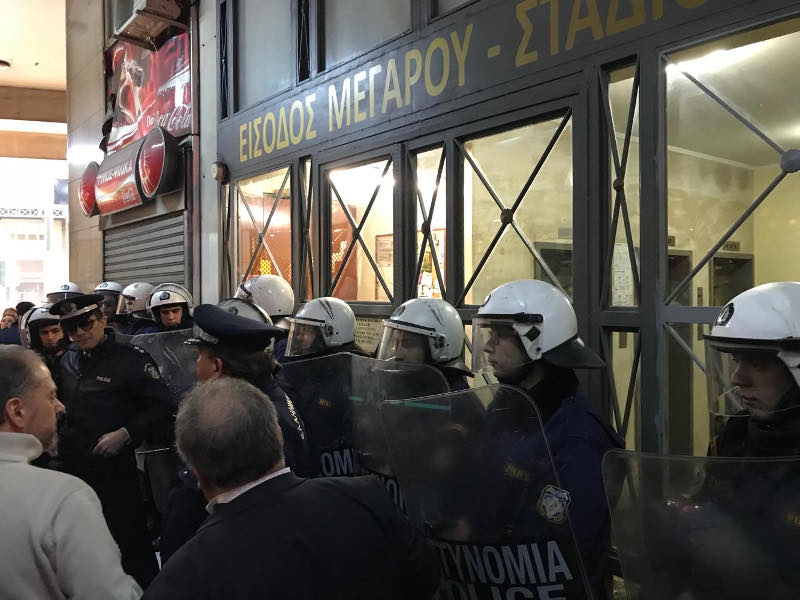 Tension and clashes between police and protesters opposing auctions of foreclosed homes took place outside notary offices in central Athens on Wednesday afternoon.
Members of the Greek Communist Party union PAME met at a notary office in Piraeus where a house was auctioned for a debt of €30,000.
However, the auction was canceled and protesters headed to a notary on Capodistriou Street in Athens where other auctions were taking place. Protesters claimed that they needed to send in a five-member committee to check if due procedures were followed.
According to a statement issued by the Greek Communist Party (KKE), instead of allowing five protesters to enter the notary office, riot police tried to push away the demonstrators using their shields while at the same time using tear gas against protesters.
The statement says that the State acted in an authoritarian way to the detriment of those opposed to the auctions. KKE condemned “the authoritarian practices” the police used against people who are against the unpopular auctions.
Meanwhile, two leftist parties held protests against an auction taking place at a notary office on Stadiou Street. Popular Unity and Plefsi Eleftherias members gathered to protest against the auction.
Plefsi Eleftherias chief Zoe Konstantopoulou went to the Prosecutor’s Office of the Athens Court of First Instance and filed a suit against the auctions on behalf of Greek citizens, demanding that auctions stop altogether.