GRNews
GreekReporter.comGreek NewsDiplomacyAre Greece and Turkey Really on the Verge of War?

Are Greece and Turkey Really on the Verge of War? 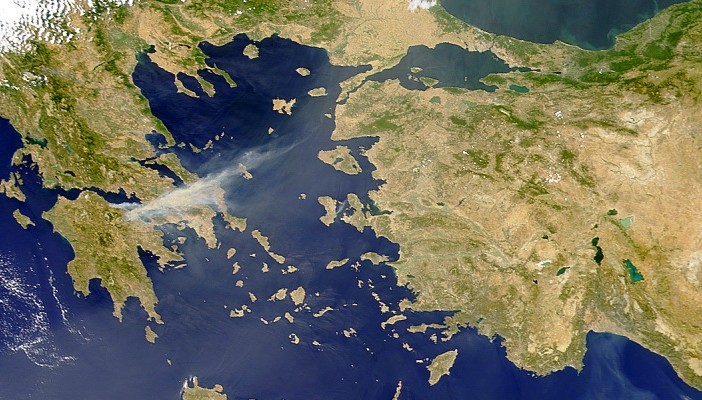 The Aegean is heating up.
Out of ten results produced by googling the words “Greece” and “Turkey” together, eight are related to current or past conflicts between the Aegean neighbors. In the meantime, four Turkish warplanes were reported in Athens’ airspace on Wednesday, following Monday’s 42 aircraft incursions.
This, when viewed alongside scenes of Turkish vessels buzzing around the Imia islets, Ankara expanding its military fortifications in that part of the Aegean and the bellicose language coming from Turkey’s leadership and opposition alike, nervousness on the part of Greeks is understandable.
Greece’s military publishes a monthly catalog of airspace incursions by Turkish jets and 2018 has already produced a bumper crop of Turkish aircraft violating Greek airspace.
Thirty-three Turkish planes intruded on Greek airspace and broke international aviation rules in the first 12 days of February, more than a third of the same number for January alone.
Turkish warships off the coast of Cyprus are also embroiled in a stand-off with an Italian-chartered drill ship, part of a complex web of conflict over the island’s future.
A question now on the lips of many people in Greece is: “Are we going to war with Turkey?”
The answer is “no” – for now.


Crises
Turkey’s government playing fast and loose by the rules in the Aegean is nothing new. Repeated crises over the decades has forced Greece to maintain an expensive range of defensive military deterrents, almost unthinkable for a country which is in the same military pact as Turkey.
But where Greece has one large neighbor to contend with, Turkey is now embroiled militarily in a multi-faceted war in Syria which is testing its international relationships – particularly that with the U.S. – to breaking point.
Its military is still recovering from the waves of purges which swept its ranks in the aftermath of the July 2016 coup attempt. Turkey is trying to bring its combat pilot numbers back to pre-coup levels, with some speculating that dogfights with Greek warplanes provide essential ‘training’ before combat missions in Syria, northern Iraq or eastern Turkey itself.
Turkey’s domestic media is backing the military operation in Syria’s Afrin region, and much of the country has rallied round its fathers, sons and brothers fighting in the army, believing them to be securing Turkey’s security in a difficult neighborhood.
Opinion polls in Turkey repeatedly show the public is far more concerned with the threat from armed Kurdish groups like the PKK, than ISIS, for example. Anti-Americanism is also at an all-time high. Greece does not feature much on this threat level.
Turkish public opinion – whether for or against Erdogan – also largely subscribes to the idea that meddling foreign powers in the West have an agenda to break up Turkey, an outlook with deep roots in the bloody wars which led to the formation of the republic nearly 100 years ago.
So, the Aegean tensions with Greece – always present – have been turbocharged by the simultaneous ratcheting up of tensions with Cyprus and inside Syria. This is what is giving them particular bite at this time. 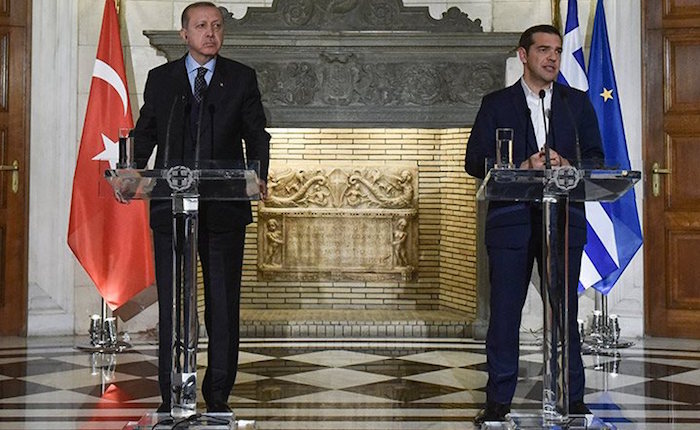 Pragmatism
Turkey’s mercurial leader, Recep Tayyip Erdogan, likes to play hardball with the West but there is a pragmatism at the heart of his outlook.
For now, it makes no sense for Turkey to have a ‘hot’ war with Greece – an EU state and a NATO ally. On the other hand, NATO has not exerted enough pressure — at least publicly — on Turkey to halt its aggression.
Turkey has too much invested economically with Europe to engage in a self-destructive war in the Aegean. Turkey’s EU bid – which Erdogan last year said the Turkish people would be invited to drop – found new energy when he visited the Vatican recently and declared nothing but full EU membership would do.
The March 2016 refugee deal between Turkey and the EU also saw cooperation, of sorts, across the Aegean, although the deal’s future looks uncertain amid Turkish claims the EU has not kept its side of the bargain.
Turkey’s leadership is capable of rapid and pragmatic U-turns. The recent and sudden release of a Turkish-German journalist detained for a year on “terrorist propaganda” charges is thought to have been secured in return for the upgrading of German-made tanks in Turkey’s military.
In short, despite the rhetoric, Turkey is still largely plugged into the NATO sphere of influence and the European economic system, even if its erratic behavior and internal divisions are causing ostensible ‘partners’ some concern.
But with elections coming in Turkey next year, and with Erdogan needing to secure at least half the country’s support, hot-button issues or historical grievances connected to ‘lost’ islands in the Aegean or Muslim minorities in Thrace provide a nationalistic rallying point.
It is the possibility of an “accident” which most alarms observers.
One collision between Turkish and Greek ships near Imia led to phone calls at prime ministerial level between Athens and Ankara. And although the U.S. is likely to be conducting some shuttle diplomacy behind the scenes, it remains worried that an unplanned incident in the Aegean could spiral out of control.
Greece may try to exert diplomatic pressure on the U.S. to curtail jet-fighter sales to Ankara, or continue to appeal to NATO to take a more robust stance against its second-largest member, but Ankara also remains incensed at other issues, such as Greece’s ‘failure’ to extradite terrorist suspects or former Turkish servicemen wanted in connection with the coup.
Provocations in the Aegean may be nothing new, and they may be particularly bad at the moment, but with a major EU summit coming up in Varna, Bulgaria, on March 26 – which will include Erdogan – this risky game of brinkmanship in the Aegean should hopefully subside.