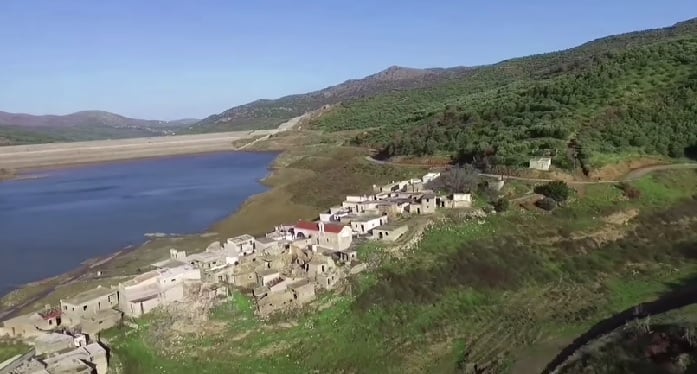 Aerial footage has emerged of an abandoned village in Crete which refuses to be submerged under an artificial water reservoir.
The controversial Aposelemi dam project, which should solve a water-supply problem in Heraklion and other cities on the island, requires that the medieval village of Sfendyli be almost completely covered in water.
Years have gone by, but Sfendyli is still standing.
In the footage captured by a drone, the village seems intact. In fact, the water level seems to be receding when compared to video footage from 2015.
Local officials blame a chronic drought.
The foundation of the village dates back to 1577. A Byzantine church from the 14th century with impressive historical frescos by Emmanuel and Ioannis Fokas, significant representatives of Constantinople art in Crete, is still standing.
The Greek state has already provided the residents compensation for the loss of their properties.
However, villagers claim that the compensation is too little and that the government should have arranged for the village’s relocation to another region.
Sfendyli in 2018