GRNews
GreekReporter.comGreek NewsDiplomacyGreece Looks at USA to Calm Down Turkey

Greece Looks at USA to Calm Down Turkey 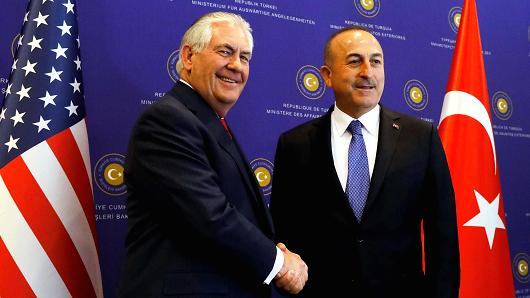 Greece is expecting the US administration to intervene and de-escalate the crisis with Turkey over the Imia islets, according to diplomatic sources in Athens.
The Greek government is hoping that US Secretary of State Rex Tillerson, who is currently in Ankara for an official visit, will persuade the Turkish leadership to tone down its actions in the Aegean.
The US Ambassador to Greece Geoffrey R. Pyatt will also be in Ankara and will brief Tillerson about recent developments.
On Monday night, a Turkish patrol boat rammed into a Greek coast guard vessel near Imia, in the most serious incident between the two NATO allies in recent years.
The two countries went almost to war in 1996 over sovereignty of Imia islets (Kardak in Turkish). A confrontation was avoided then largely due to the intervention of Washington.
The Department of State issued a statement on Tuesday stressing that Greece and Turkey should take measures to reduce the tension in the region.
Kammenos briefs NATO
On Wednesday,  Greek defense minister Panos Kammenos briefed Greece’s NATO allies on the incident at Imia and presented audiovisual material that prove Turkey’s provocation.
“The Imia islets are Greek, the Greek Coast Guard and Navy are there and we will not back down on issues of national sovereignty for any reason. We ask our allies in the EU and NATO to adopt a clear stance,” he told AMNA.
He also said that it was inconceivable that Turkey, a NATO ally, behaved like this toward another ally, in this case Greece.