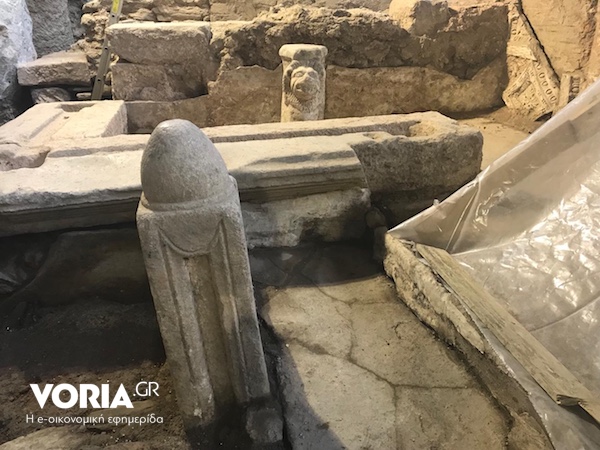 A trove of antiquities has been unearthed as the excavations for the Thessaloniki metro system continue, with recent discoveries of Christian period building remnants.
The most recent findings are at the Agia Sophia Metro Station. According to Voria.gr news website, archaeologists found a fountain structure at the southeast end of the marble-lined square, which came to light in earlier excavations of the spot, in the section above Egnatia Avenue.
The discovery originally made both construction engineers and archaeologists to stop works in order to discuss how to keep an ancient marble covered square and fountain system intact, while at the same time deliver the station on time and without exceeding the construction budget, Voria.gr says.
The structures unearthed reveal a lot about the character of the city during the Early Christian years. Archaeologists say that the fountain structure has a length of over 15 meters and is 2.85 meters tall, adding that the fountain is estimated to be one of the largest in the Roman world.
The pertinent authorities decided to keep the excavated square and the post-Byzantine structures in place. The fountain and surrounding findings will be removed so that the monument will be displayed prominently. The Agia Sophia and Venizelos stations will operate as open-air museums.