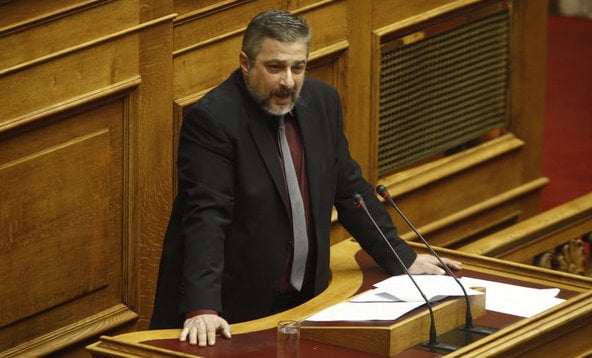 A Three-Member-Appeal Court handed a twelve-month suspended sentence to Golden Dawn lawmaker Ioannis Sachinidis, on Friday for slandering Communist Party MP Liana Kanelli.
The court unanimously convicted the MP after the prosecutor recommended a 20-month sentence. The ruling concerns comments made by Sachinidis in a parliament speech in December 2015, when he called Kanelli the “moral instigator” of the killing of two GD members in Neo Iraklio 2013.
The comment that ended him in court was the following: “Yesterday, from this podium, we heard a speech by the female Stalin, Mrs. Liana Kanelli, who chose to talk about Golden Dawn again, instead of the budget. I remind you that it was she who said, from this podium, that no fascist will remain from Perama to Keratsini. I denounce her as the moral instigator of the murder of our two companions.
(Source: AMNA)