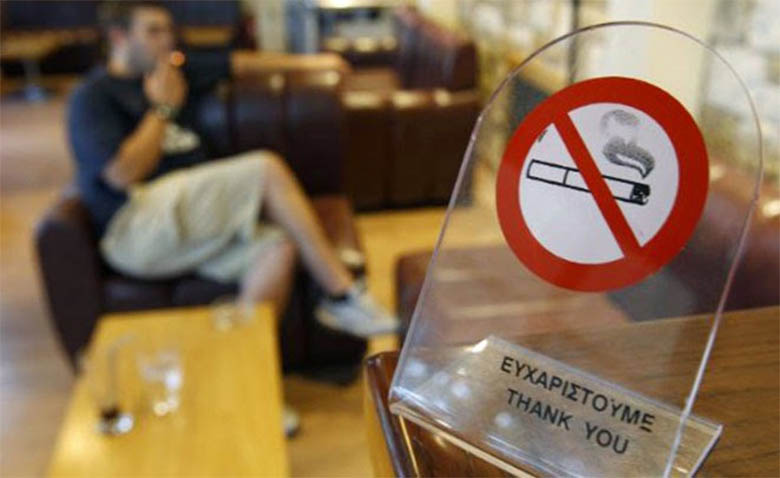 Greece’s Health Minister Andreas Xanthos on Wednesday called on competent authorities to enforce the anti-smoking law, and start strict checks on public places where smoking is being permitted.
The 2010 anti-smoking law that bans smoking in closed spaces such as public buildings, restaurants, coffee shops and theaters, was never truly enforced. Other than some random checks and fines in the first few months, smoking in public places continues to be rampant in Greece.
In an effort to restore the dormant bill, the ministry issued a new memorandum as part of an effort to combat smoking dependency, and the negative effects of the use of tobacco products on the population as a whole.
The memorandum calls on all pertinent authorities to enforce the law by doing checks on establishments that allow smoking, and impose harsh fines on offenders.
More specifically, in accordance with the current anti-smoking legislation, civil servants and public sector employees are not allowed to smoke at work, and if they do, disciplinary action against them will be taken.
Smokers in public places will be fined 50 to 500 euros, according to the circumstances.
Owners of businesses such as bars, restaurants and coffee shops will be fined 500 to 10,000 euros if they allow customers to smoke. Repeat offenders will be fined and their license will be revoked after five offenses.
A fine of 500 to 10,000 euros will be imposed to those who sell tobacco products to minors or tolerate violation of the relevant provision. Similarly, the same fines will apply to those who advertise tobacco products.
To protect minors from second hand smoke, a steep fine of 1,500 euros will be imposed on drivers who smoke with a child under 12 in the car.