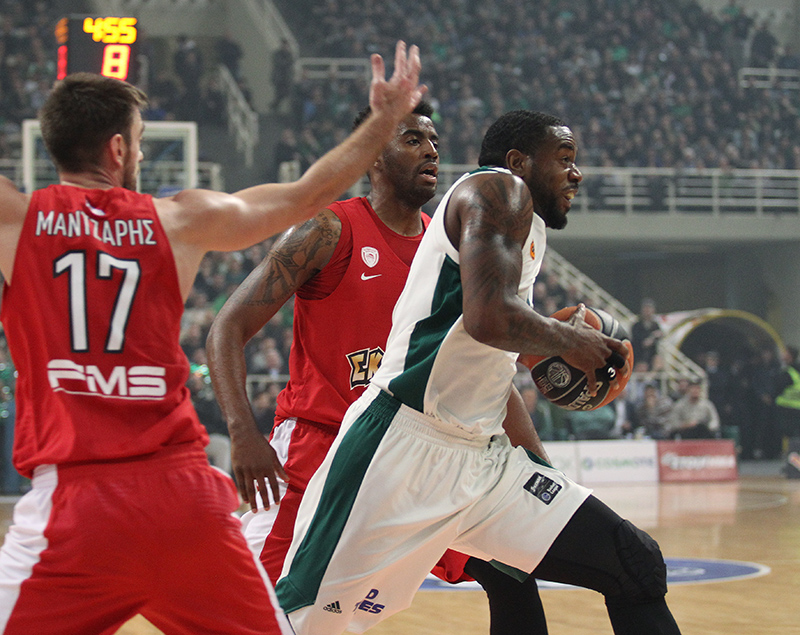 After two away wins in Piraeus; one for the Greek league and one for the Euroleague, Panathinaikos scored a third win against Olympiakos. This time they won at home for the domestic league, proving they can beat their “eternal” rivals in all manner of ways.
The Greens had to pull aces up their sleeves in order to submit the Reds in a game where both teams had serious efficiency issues. Panathinaikos have been going through a bad moon offensively, while Olympiakos are in crisis mode with consecutive defeats in Greece and in Europe.
Yet, the Reds came on strong in the Olympic stadium game’s first quarter, storming with 11 – 20 and keeping their opponents away from scoring anything other than free shots for almost 9 minutes. That’s where Panathinaikos’ coach, Xavi Pascual, pulled in three players with minimal contribution during the season.
Point-guard Lukas Lecavicius, center Ian Vougioukas and power forward Dinos Mitoglou came from the bench contributing crucial baskets and inspired defense to the Greens, who kept narrowing the 9-point first quarter Olympiakos lead.
At half time the Greens were just 2 points behind in the score (30-32) and in the third quarter, “usual suspect” KC Rivers took control of the offense. With his consecutive 3-pointers and hard-fought 2-pointers (top scorer of the game with 16 in total), Panathinaikos took a 2-point lead (50-48) in the end of the third quarter.
With Olympiakos forwards Jamel McLean and Nikola Milutinov eliminated by four committed fouls each due to their team’s constantly unlawful, hard defense, Panathinaikos kept expanding their lead, with the final score at 68 – 61.
Choosing to disregard his team’s obvious problems in the past three weeks (four defeats in as many Euroleague away games), Olympiakos coach Yiannis Sfairopoulos complained about the referees’ decisions, claiming they determined the outcome.
All in all, it was a game with zero stakes (Panathinaikos had already established playoff home court advantage), no rhythm and consecutive bad offensive choices by both sides, so it came down to club prestige. The Greens managed the win and with it a solid psychological advantage over their rivals with the season still half way through the end.
The two teams will have another go at each other, their fourth this season, in early March at the Greens’ home court in the Olympic stadium for Euroleague. With the Greek league final playoffs looming in May and a potential Euroleague playoff standoff in April’s Top-16, there are many more games between the two rivals yet to come.