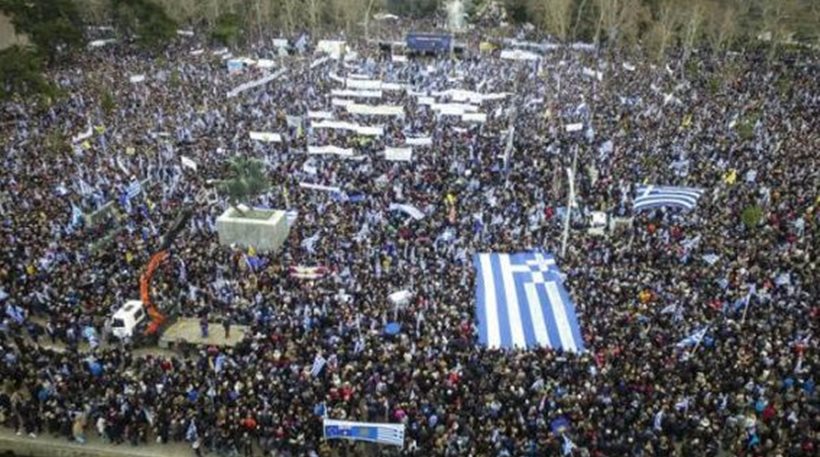 The Former Yugoslav Republic of Macedonia name dispute has created a big headache for Alexis Tsipras and his party.
Initially, the Greek prime minister tried to use the issue to deal a blow to the main opposition New Democracy party, accusing them of nationalism and of being divided among themselves.
However, the number of protesters at the Thessaloniki rally earlier this month and opinion polls which show 68 percent of Greeks oppose the use of the word ‘Macedonia’ in the name of Greece’s northern neighbor has made people at Maximos Mansion a bit nervous.
However, the biggest problem for the administration comes from its junior coalition partner, the Independent Greeks (ANEL).
ANEL chief and Defense Minister Panos Kammenos initially said he would refuse to agree on a name that includes the word ‘Macedonia’. Then Kammenos changed his tune and, indirectly, showed he is willing to accept the “M” word.
But his party lawmakers seem adamant in opposing any use of ‘Macedonia’ by Greece’s northern neighbor.
So, Tsipras is now thinking of changing political alliances. According to reports citing sources from Maximos Mansion, the prime minister has already approached PASOK leader Fofi Gennimata and To Potami (The River) chief Stavros Theodorakis in an attempt to persuade them to give him the votes he needs.
The two parties have now joined forces under the name Movement for Change with a clear center-left identity. Tsipras’ SYRIZA has 145 lawmakers and needs to get 151 votes in parliament to pass a name that would include the word ‘Macedonia’.
If one, or both, of the above agree to join the Tsipras administration in exchange for seats in the cabinet, it would be great for the ruling party. SYRIZA would get rid of its right-wing ANEL partners and form a new coalition with one of the above center-left parties. This will please their leftist constituents, will win more voters from the two parties and limit opposition voices.
What next?
And if that hypothetical scenario works for Tsipras, what next? Even if he manages to get the votes needed to agree on a new FYROM name which will include the word ‘Macedonia’ — this is indisputable; it has already been decided by NATO, the European Union and the United Nations — how will he deal with the 68 percent of Greeks who oppose the name?
On Sunday, the leftist government will have to face several hundred thousand Greeks who will gather in Athens’ Syntagma Square and demonstrate against the new FYROM name and, consequently, against the administration.
What will happen outside the Greek parliament will be much more difficult to handle than what happens inside. It is certain that Tsipras will get the votes needed for the name agreement to pass in parliament — but that would be a Pyrrhic victory. In the eyes of many Greeks he will be the traitor who ceded the name of Macedonia to the neighboring Balkan country. That is likely to cost him dearly in the next elections.
No surprise then that government-friendly media and leftist activist groups are already on a war footing for Sunday and are trying to sabotage the rally. Anarchist website Indymedia has declared war on Sunday’s protesters and posted a call to arms, announcing a counter-rally near Syntagma to terrorize potential protesters.
Leftist newspapers try to ridicule potential demonstrators or brand them “nationalists” and “fascists” as does the pro-government press.
As happened with the Thessaloniki rally, it is expected that the government will propagandize in its favor after the inevitable clash between the two demonstrations. Again, Tsipras will call the protesters “extreme rightists” and proceed with accepting the new name for FYROM featuring ‘Macedonia’.
Then he will claim that his administration succeeded in solving an issue where the governments of the past 26 years failed.