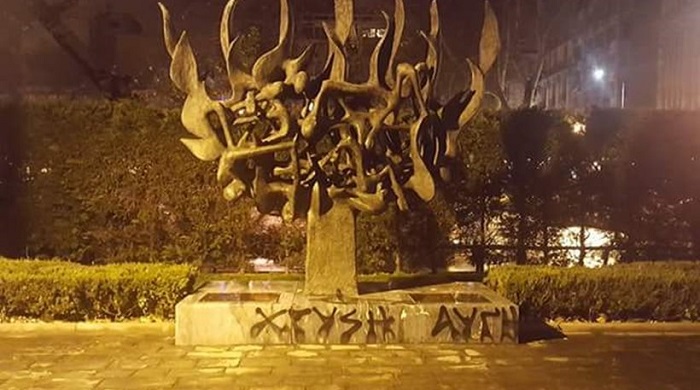 Greece’s Central Board of Jewish Communities (CBJCG) has condemned the desecration of Thessaloniki’s Holocaust Monument which took place on Sunday.
The words ‘Golden Dawn’ — the name of a Greek far-right party — were daubed on the base of the sculpture which commemorates the 50,000 Jewish residents of the city who were deported by the Nazis. Over 90 percent of these deportees were eventually killed.
Mayor Yannis Boutaris condemned Sunday’s attack.
Speaking to the Athens-Macedonian News Agency, Boutaris vowed to raise the issue at the next city council meeting.
The incident came one week before International Holocaust Remembrance Day (Jan. 27).
In a statement, the Jewish group said: “[The perpetrators] didn’t just desecrate the memory of Thessaloniki’s 50,000 Jews, Greece’s 65,000 Jews and Europe’s six million Jews who were displaced and murdered by Nazis in German concentration camps.
“They desecrated democracy itself, desecrated the city’s culture and proved that the remnants of Nazism still have deep roots in our country, which, if society itself doesn’t uproot, they could spread even further, leading us again towards the darkest period of world history.”
The CBJCG called again on the government, the church and social bodies to condemn in the strongest terms the desecration of Thessaloniki and Greece’s history.