When Greeks Rallied Against FYROM Name in 1992 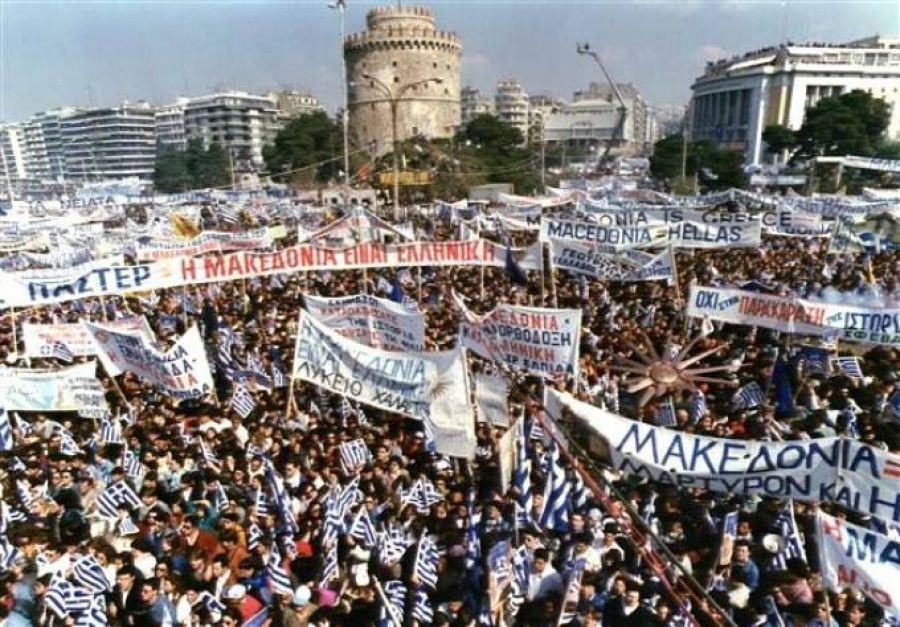 It was 26 years ago and it seems like it was another country. It was Feb. 14, 1992, a time that looks distant and bizarre in today’s Greece, blighted by the ongoing, crippling economic crisis.
But 1992 was a year of prosperity, a time when Greeks had every right to feel national pride.
Just a few months before that day, a small Balkan territory that used to be part of Yugoslavia, arbitrarily declared itself a nation called the “Republic of Macedonia”. That was hubris for Macedonians and Greeks in general. And it was reason enough for one million Greeks to gather in Thessaloniki and shout “Macedonia is Greek”. One million: the biggest rally in Greek history.
But, as Greek history shows time and time again, politicians were not up to par to handle such a serious issue. The New Democracy administration at the time was too busy solving internal party problems to deal with such a serious foreign policy issue.
Also, Greek politicians were convinced that they were right and that no other country could claim the name of Macedonia, so they more or less let the issue resolve itself, believing that right was on their side.
So the voices of the one million Greeks who covered the entire coastal front of Thessaloniki were ignored. Or were not strong enough to activate the politicians to do right by the people and resolve the problem.
They settled on the Former Yugoslav Republic of Macedonia (FYROM) and later vetoed the name so that FYROM could not become a member of the EU or NATO unless the issue was resolved.
Constantine Karamanlis, the last great politician of the right, President of the Hellenic Republic at the time and a Macedonian by birth, cried during the rally in front of TV cameras. Unfortunately, the Greek government of the time failed to put a stop to Skopje and their irredentist tendencies.
Nevertheless, the 1992 rally was a celebration of Macedonia and Greece. The Greek flag was flying proudly in the hands of young and old, regardless of political affiliations. It was a serious issue and Greek people took to the streets to show their patriotism. They had hope that their voices would be heard; some were even certain of it.
Tired, defeated
Twenty-six years later, Greeks feel tired and defeated. After eight years of austerity and three years of a leftist government that promised to put an end to it but pushed them even deeper into recession, they feel that their voice doesn’t matter anymore.
They are too beaten to wave the flag. They no longer rally against anything. Not against the tax avalanche, not against the higher costs of living, not against two-and-a-half years of capital controls, not against an uncontrollable influx of migrants, not against insane education bills that turned Greek universities into markets for drugs and contraband goods, not against the tolerance of the Greek government to violent and destructive anarchists, not against the shameless lying of an administration that was not true to a single one of their election campaign pledges, not against the continuous degradation of their lives.
A difference between the 1992 and the 2018 rallies over the FYROM name was that, back then, the enemy was the government in Skopje. Today the enemy is the Greek administration that will, inevitably, accept the use of the term Macedonia in the name of the neighboring country.
This is because thousands of Sunday’s protesters feel betrayed by a government that not only refuses to make pubic what is negotiated, but not once said that it opposes the use of the word Macedonia in the name.
Its representatives, from the prime minister to the last lawmaker, not once took a stance over the use of ‘Macedonia’ in the name; they only speak vaguely about not allowing FYROM to use words in the name that show any kind of irredentism or possible territorial claim.
As if the use of the word Macedonia alone by Skopje does not challenge Greece’s sovereignty and history.
The difference between the two rallies is also a difference between two political eras. Greeks were more united then, while today every political side blames the others for all problems.
The tactics the current Greek administration is using is division. This is why the government completely separated itself from the rally. And on top of that it accused all participants of being fanatical nationalists or even fascists. No wonder anarchists held their own demonstration against the FYROM name protesters and bullied some of them.
Finally, the biggest difference between the two mass demonstrations is that the participants of the one on Sunday know deep down in their hearts that, most probably, the neighboring country will be named something like “New Macedonia”, as proposed by the UN, with the blessings of Maximos Mansion.
They also know that the name “Macedonia” for the Balkan neighbor is used by 160 nations. Yet they demonstrated for that lost cause and they will do so again on Feb. 4 in Athens. Maybe for them, fighting for a lost cause is the noblest act to show their patriotism.