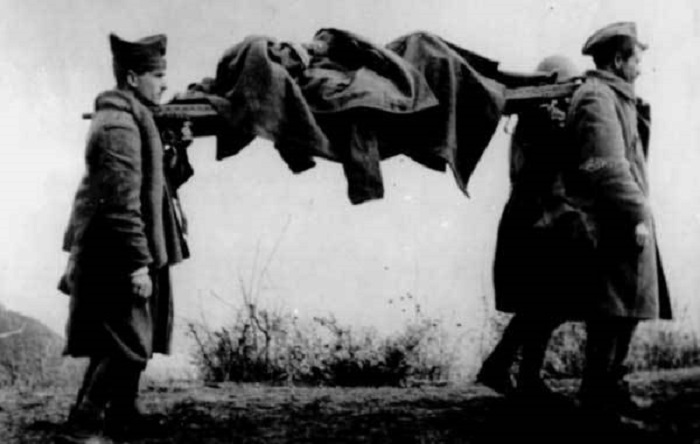 The process of officially exhuming the remains of thousands of Greek soldiers who fell in the mountains of southern Albania at the start of WWII is to begin Monday, with the activation of a bilateral agreement signed by Greece and Albania in 2009.
An estimated 6,800 to 8,000 Greek soldiers are believed to be buried in makeshift graves throughout the territory, killed in the pitched battles between Greek and Italian forces in 1940-41, during the Greco-Italian war that ushered Greece into the Second World War.
Their remains, once found and identified, are to be buried in two cemeteries set aside for the fallen soldiers, in Vouliarates and Kelcyre in southern Albania.


First exhumations are scheduled to begin at 11.00 a.m. local time (0900GMT) on Monday, with crews supervised by a bilateral committee of Greek and Albanian experts. They are digging at locations that, according to old (mainly Italian) maps and accounts from local residents, were the hurried burial sites for hundreds of Greek soldiers.
This search for the informal graves will then continue and extend throughout the mountain range up to Korce.
The 2009 agreement between the two sides had been frozen and was activated following a meeting between Foreign Minister Nikos Kotzias and his Albanian counterpart Ditmir Bushati on Crete. It was hailed as a step forward in efforts between the two governments to improve bilateral relations.
It calls for the location, identification and exhumation of the fallen Greek soldiers’ remains and their reburial in the two cemeteries.
The issue was first raised by Greece in the early 1980s when the remains of 6,300 Italian soldiers were exhumed and returned to Italy.

Using old Italian military maps which recorded the makeshift cemeteries where both Italians and Greeks were buried, the remains of some 6,000 fallen soldiers were found scattered in the mountains of southern Albania.
A 1985 document issued by the Enver Hoxha regime, obtained by the Athens-Macedonian News Agency (pictured below), orders the People’s Councils of Gjirokastr, Permet, Korce, Sarande and others to locate and identify the graves of Greek soldiers killed in their territory but this process stalled after Athens refused to transfer the remains to Greece. 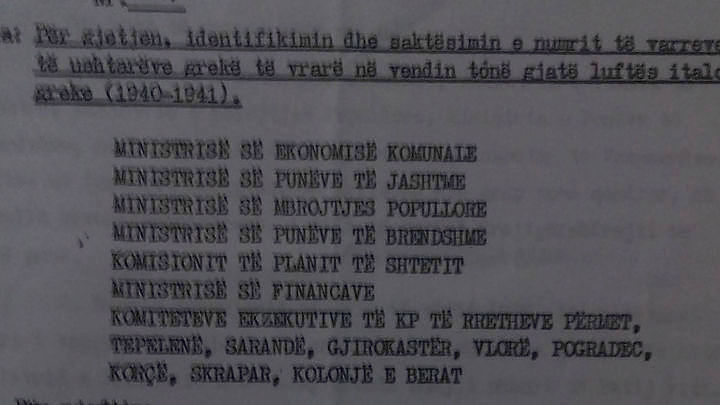 Greece’s foreign minister of that time, Karolos Papoulias, in a statement in 1987 while on an official visit to Gjirokastr — during which he paid his respects at one of the makeshift graves — said that the “Greek dead are in their homeland”.
The matter was reopened after the regime fell, leading to the signature of the 2009 agreement, which in turn stalled over what the Albanian side called “procedural issues”.
Many Greek-Albanians suffered persecution at the hands of the Hoxha regime for concealing the location of buried Greek soldiers from the authorities.
Among them was the father of now 85-year-old Ermioni Brigou of Himare, who has been tending the graves of six Greek soldiers buried in the garden of her family home for the past 78 years.

The six soldiers fell in the battle of Himare and where buried in two makeshift graves in the family’s yard by her father, who was punished by the Communist regime with a 18-month relocation for refusing to reveal where they were.
She also kept their presence a tightly guarded secret until the regime fell.
These six soldiers are already identified and will not be transferred from her garden, as this is neither what Ermione wants nor is there any reason to disturb their rest.
Source: ANA-MPA; photos courtesy of Balkan Insider