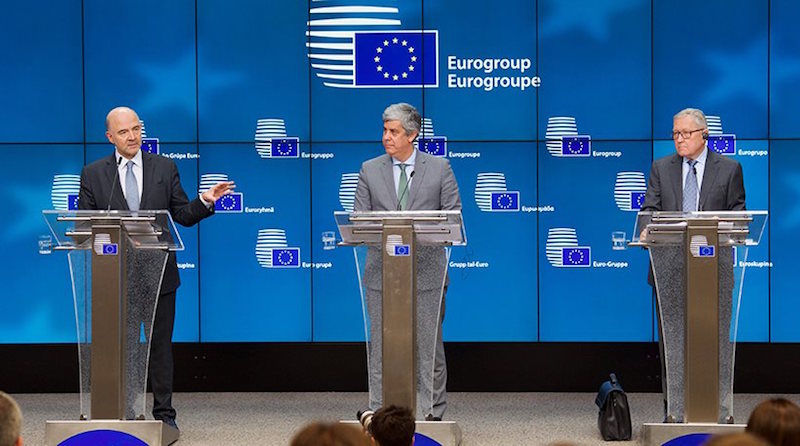 The meeting of euro zone finance ministers was completed on Monday, with peers urging Greece to legislate the remaining prerequisites for the completion of the third review of the bailout program.
Greece has still to complete 15 of 110 required prior actions, but its euro zone peers praised the overachievement of the country’s fiscal targets over the last three years.
Upon completion of the remaining prior actions, the green light will be given for the next loan tranche of 6.7 billion euros.
Below is the complete official Eurogroup statement.
“The Eurogroup welcomes the implementation of almost all of the agreed prior actions for the third review, following the staff level agreement on the policy package that was presented to the 4 December Eurogroup. Notably, the Greek authorities have adopted the 2018 State Budget which is compliant with the agreed primary surplus target of 3.5% of GDP.
Moreover, the European institutions’ compliance report shows that the Greek authorities have over-achieved the fiscal targets set over the last three years (2015-2017).
The Greek authorities have also continued to strengthen tax collection through the Independent Authority of Public Revenue and enhanced the fairness and effectiveness of the social welfare system.
The business environment has been improved by further actions aimed at opening up regulated professions, improving the investment licensing system, lifting regulations that unnecessarily restrict competition in product markets as well as the opening-up the energy markets.
Progress in the framework supporting NPL resolution was achieved through further actions related to the effective operationalization of the out-of-court workout scheme and the start-up of electronic auctions.
The Eurogroup reconfirms the importance of an ambitious comprehensive growth strategy with strong ownership from the Greek authorities. The authorities are invited to finalize it in cooperation with the institutions well before the end of the programme.
The Eurogroup calls on the Greek authorities to complete the outstanding prior actions as a matter of urgency.
The Eurogroup mandates the EWG to verify the full implementation of the outstanding prior actions on the basis of an assessment by the European institutions.
This will include an assessment to confirm that a continuous and unimpeded flow of electronic auctions is ensured as well as the completion of government pending actions in the field of privatization.
Following the full implementation of the prior actions and subject to the completion of national procedures, the ESM governing bodies are expected to endorse the supplemental MoU and approve the disbursement of the fourth tranche of the ESM programme.
The fourth tranche under the ESM programme amounting to EUR 6.7 bn will be disbursed to Greece in two disbursements, starting with a first disbursement in February of EUR 5.7 bn to cover debt servicing needs, to allow the further clearance of arrears and to support the build-up of the cash buffer of the Greek State, in order to support Greece’s return to the market.
The subsequent disbursement for arrears clearance may be approved by the EWG in Spring, subject to a positive reporting by the European Institutions on the clearance of net arrears using also own resources and a confirmation from the European institutions that the unimpeded flow of e-auctions has continued.
The Eurogroup will now turn its attention to the final stages of the ESM programme, which is expected to end in August 2018.
The Eurogroup confirms the start of the technical work by the EWG on the growth-adjustment mechanism, as part of the medium-term debt relief measures to be implemented, if needed, following the successful conclusion of the programme, in line with the agreement in the Eurogroup of 15 June 2017.
The Eurogroup invites the European institutions and the IMF to take into account the holistic Greek growth strategy when updating the DSA.”