By Theo Ioannou
January 16, 2018
Facebook
Twitter
WhatsApp
Linkedin
Email
Cyprus hosted the leaders of Greece and Jordan in Nicosia on Tuesday, in a three-way meeting aimed at strengthening ties in the volatile Mediterranean region on a host of issues, from water management to the protection of artefacts.
Jordan and Cyprus signed bilateral agreements on economic and technical cooperation, mutual academic recognition of higher education qualifications, public health and medical science, as well as agriculture and rural development.
The agreements were signed by the respective ministers of the two countries in the presence of President Nicos Anastasiades and the King of Jordan, Abdullah II, on the sidelines of the trilateral summit between Cyprus, Greece and Jordan taking place at the presidential palace, Nicosia.
Prior to the signing of the agreement, Anastasiades and Abdullah had a private meeting that was followed by expanded talks between delegations of the two countries. 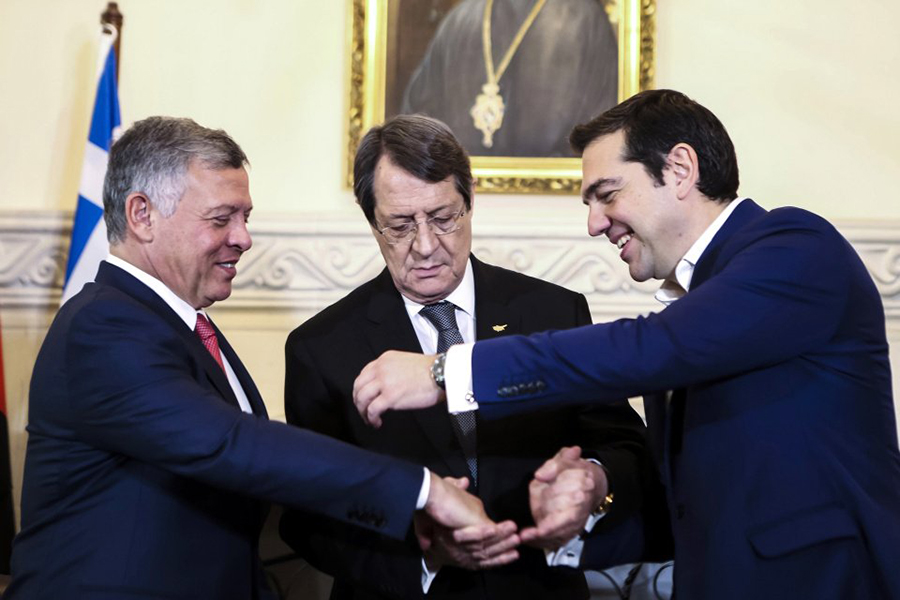 An agreement by the three sides was also signed on the prevention of theft, illicit excavation and export of cultural property.
Earlier, before the start of the summit, Greek Prime Minister Alexis Tsipras stressed the importance of upgrading and extending Greek and Cypriot cooperation with Jordan, a country that plays an “important” role in the region.
“Jordan plays a very important role in the Middle East, particularly in terms of security and the flow of refugees,” said Tsipras.
“The common strategy that we have pursued to highlight Cyprus and Greece as the pillars of security, peace and cooperation in the region is a strategy that has produced substantial results and we are continuing to upgrade our role and presence in the wider region,” he added.
Anastasiades said the deepening of the relationship with Jordan would help face the challenges of the region and welcomed Tsipras’ presence in Nicosia.
“On the one hand, we have close cooperation within the framework of our regular contacts with Greece, but the most important is the continuation of the common policy of broadening relations with the countries of the region,” he said.
Source: Cyprus News Agency