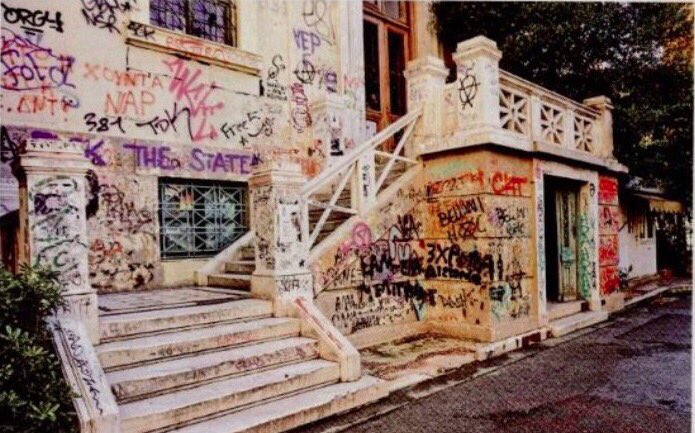 Main opposition leader Kyriakos Mitsotakis promised via Twitter that he will put an end to vandalism in Greek universities, if New Democracy wins the next election.
What triggered the Mitsotakis tweet was a photo report of the National Technical University of Athens (NTUA) defacing that was published in Kathimerini newspaper on Wednesday. The pictures show the destruction and vandalism in the historical building that now serves as the administrative premises.
“This is an unacceptable picture of a Greek public university. This shameful picture of NTUA and other universities will stop once we become the government of this country,” Mitsotakis tweeted.
The conservative party leader has often referred to the state of anarchy existing in Greek universities and NTUA, which is located in the Exarchia area, a neighborhood that harbors anarchist and criminal elements.
In the past, Mitsotakis and several of New Democracy MPs have also referred to numerous violent assaults by the above elements against students, faculty and other citizens.
However, the sad picture of Greek higher education institutions is not a result of the “leftist tolerance” that the conservative party has accused the Syriza administration of. It is often that New Democracy MPs have accused the leftist government of tolerating the anomie that exists in Greek universities and technical colleges, if not harboring it.
It is true that many of the vandals, anarchists, and extreme leftists have voted for Syriza at least once. Cabinet members have often justified and expressed support for violent protests and acts, calling them “activism” and law-breaking groups as “well-meaning collectives. Even the citizen protection minister has called the gangs of anarchists that burn buses and cars and repeatedly destroy public and private property as “collectives” that he is willing to sit down with and discuss their concerns(!) The son of the Parliament President is a well-known anarchist. Two ministers have admitted that their sons are anarchists. So, how come a Greek citizen expects that this government is willing to put an end to all this lawlessness?
Mitsotakis, if he gets elected, will find it next to impossible to put an end to the anomie that plights Greek society. Long years of impunity to illegal acts under the veil of “political activism” have made such acts an acceptable evil that is an integral party of life, in urban centers at least.
Adding to the “asylum status” that the current education minister has legislated, police are not allowed to enter a university or college unless a major crime has been committed, and only after the university dean has asked for police intervention.
As a result, some Greek universities, especially the ones in Athens and the Aristotle University of Thessaloniki, have become drug trafficking centers, places to make use of drugs, markets for contraband cigarettes, shoes, bags and other goods, sold mostly by illegal migrants.
One would advise the New Democracy chief to not make such gargantuan pledges, simply because it is not a matter of fighting vandalism or public property destruction. It is a matter of the notion of anomie that has permeated Greek society, much more so in the eight years of the economic crisis.
One should also remind Mr. Mitsotakis that the same problems existed – albeit at a lower scale – during previous New Democracy administrations.