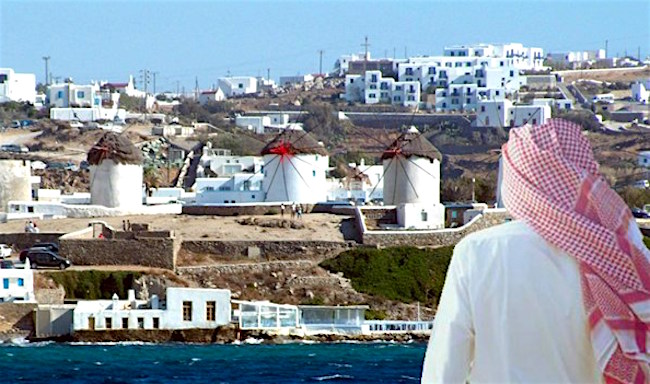 Greece is becoming a magnet for well-off tourists from the Middle East as more regular and charter flights connect Athens and the Greek islands with Arab capitals.
According to a report in euro2day.gr, the Middle East is the fastest growing market for Greek tourism.
A significant proportion of guests in the five star hotels of Athens and other cosmopolitan destinations such as Mykonos and Santorini, come from that region.
Top luxury hotel executives in the Syntagma Square area, say that the tourism boom is down to American and Arab customers.
At the same time, data show that Middle Eastern airlines are constantly increasing their available seats on the Greek routes, while charter flights from the countries of the region have grown steadily in 2017.
For example, in 2016, visitors from Lebanon recorded an increase of 30% compared to 2015, while the upward dynamic was maintained in 2017.
The rapid rise of the Lebanese market is also reflected in the strengthening of air links between Greece and Lebanon.
Starting in the summer of 2018, Aegean airlines will add Mykonos and Herakleion to its destinations from Beirut. Middle East airline is also launching flights to Greece.
The Lebanese love Greek beaches, according a tourist executive interviewed by euro2day.gr. This is evidenced by the fact that last summer 16 charter flights every week were taking place from Beirut to the South Aegean and Crete, he adds.
In Saudi Arabia there is a doubling of requests for tourist visas for travel to Greece.
At the same time, the Saudia airline is in an advanced stage of negotiations with the Greek airport authorities to launch direct flights between Riyadh and the Greek capital.
The two countries are already connected by the Aegean flights and since November 2017 by the new Greek airline Air Mediterranean.
In 2018 Greek Tourism Workshops will be held in five Middle East countries, under the auspices of the Ministry of Tourism, aimed at capturing the interest of high-income travelers.
In workshops that will bring together travel agents, hotel representatives and other officials of the tourism industry will be held in India (Delhi, 22/1), Kuwait (21/2), Saudi Arabia (Riyadh, 21/3), United Arab Emirates (Dubai, 21/4) and Lebanon (Beirut, 2/5).