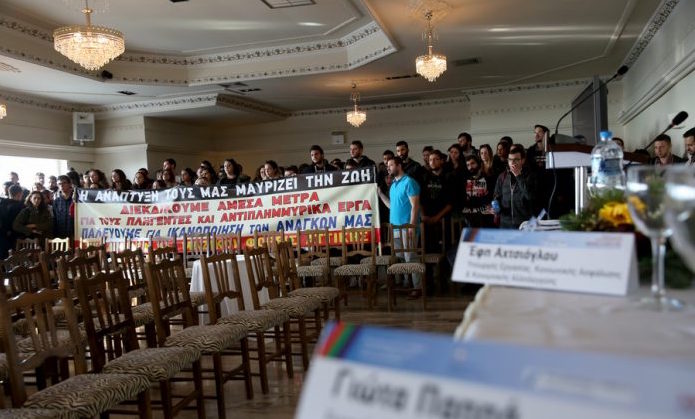 Members of the PAME trade union group affiliated with the Communist Party of Greece (KKE) on Sunday interrupted the proceedings of the 8th Regional Conference for the Reconstruction of Production in West Attica in order to protest against the government’s policies.
Shouting slogans such as “capitalism isn’t humane” and pledging to “stay on the front line in the struggle against SYRIZA-ANEL tactics”, members of PAME entered the area in the flood-stricken town of Mandra where the conference was about to start its second day.
Next door, meanwhile, student groups were protesting over education issues, such as food, housing and free education for university students.
The conference resumed at noon, after the protestors departed, with a speech by Education Minister Costas Gavroglou, who unveiled plans to form a West Attica University in January by merging with Technological Educational institutes in the area.
(Source: AMNA)