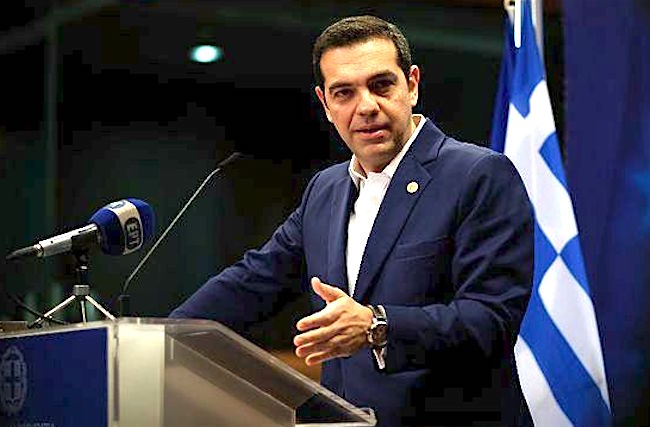 There is currently an “excessive social deficit” in Europe that is not being adequately addressed, Greece’s Prime Minister Alexis Tsipras said, in a press conference after the end of the European Council in Brussels.
“We cannot just announce measures, such as the social pillar for example, without ensuring that these measures are carried out. We cannot, on various pretexts and with rearrangements of a largely decorative nature, always find ourselves at the exact same spot without any real change to the crucial issue of social convergence,” Tsipras said.
He noted that the Greek side had undertaken an initiative for a pillar of social rights and pointed out that, without binding targets, it was not possible to take significant steps toward social support.
The Greek prime minister also strongly criticised the refusal of some EU member-states to take on their share of the burden in the refugee crisis, saying this was a “bomb at the foundations of the EU’s function.”
The letter written by European Council President Donald Tusk on this issue was “inappropriate”, Tsipras noted: “We cannot allow some parties today – on the grounds that the refugee crisis does not affect them, does not impact on them – to impose a change in the way of thinking, discussing and deciding that has been established in the EU for a long time and which is also one of its founding principles. This is a bomb at the foundations of the EU’s function.”
This was, according to Tsipras, the basis of the disagreement that he had expressed and was a “disagreement that I think we will find ourselves facing in the future”.
“I believe that at some point we must make it clear that there cannot be an ‘a la carte’ Europe. It is not possible for some to believe that they can have only rights and no obligations,” he added.
Regarding Greece’s economy, the prime minister referred to “good omens” on the economic front and a substantial drop in Greek bond yields, which had fallen to levels last seen in 2006, in a period before the economic crisis began.
On Muslim minority, Greek-Turkish relations
The issue of whether the Muslim minority in northern Greece accepts religious leaders that the Greek state recognizes is not part of Greek-Turkish relations, Tsipras said after the Council meeting.
The discussion of the minority’s acceptance officially sanctioned religious leaders in Thrace must be held with the Muslim minority itself, he said. There must be an agreement backed up by law, so that a foundation is laid long-term to overcome current issues.
In addition, Tsipras said that the European Union should convey to Turkey the need to respect international law in the Aegean Sea and to restart the negotiations on finding a solution to the Cyprus issue, the premier said.
“The European Union should be the one to convey to Turkey the necessary messages of respecting international law in the Aegean and of restarting the talks for a just and viable solution to the Cyprus issue,” Tsipras said.
During the Council’s meeting, the Greek prime minister briefed other EU leaders about the results of a recent visit to Athens of Turkish President Recep Tayyip Erdogan which he termed “necessary”, as the communications channels with Greece’s neighbor must be kept open.
(Source: AMNA)