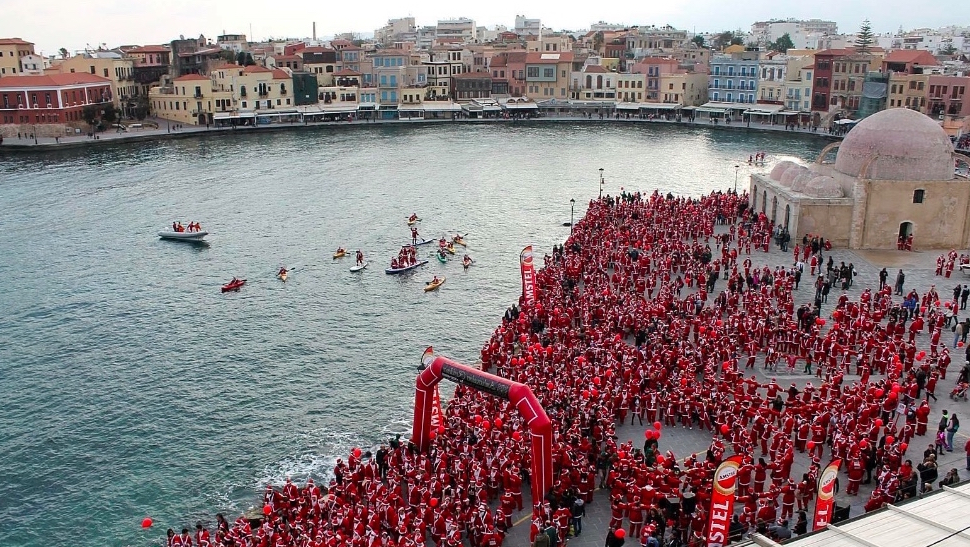 The successful Santa Run Chania is to be held for another year on Saturday, December 23 at 13:00, at the 1st Gymnasium of Chania.
The Santa Run Chania is a festive, charitable organization that raises money for ill children. As the official website says, “In our Santa Run we are all winners because we offer aid to children in need.”
The Santa Run Chania is a distance of around 3.5 km through the historic and commercial center of Chania, The money raised will be offered to four institutions for children with health problems: ELEPAP, KIFAAMEA, KIFAP and Orizontas.
Santa Run was started in Chania by a group of friends which turned into a volunteer group and eventually became a pioneering event in Greece. This is the seventh year that the Santa Run is taking place in Chania. Up to now, the charity organization has raised 320,000 euros for the four institutions. This year, they hope to raise 100,000 euros for the children in need.
The Santa Run Chania is sponsored by many companies with Cretan roots, among them, Ecos, a Greek-American company that makes environment-friendly cleaning products that are safer for people, animals and the planet.
This year, Ecos celebrates 50 years of continuous contribution to the well-being of man and the environment, Since 1967, it remains a family business that has never compromised its mission statement to make eco-friendly cleaning products.
ECOS products are certified and awarded by the United States Environmental Protection Agency (EPA) with the coveted Safer Choice as the top choice in the field of efficacy and safety of cleaning products.
Proud sponsor of Santa Run Chania, Ecos invites participants in this year’s Santa Run Chania. Santa costumes along with registration numbers can be obtained from the Santa Run House (11-17 Voloudakis Str., Chania 731 34).
Opening hours for the Santa Run House:
Monday, Wednesday 10am – 2pm & Tuesday, Thursday, Friday 10am – 2pm and 6am – 9pm, Saturdays 10am – 3pm, Sundays closed
Thursday 21 and Friday 22 of December: 10am – 9pm
The day of Santa Run Chania is Saturday, the 23rd of December: 9.00am – 13pm
Watch the Santa Run video from last year and the new 2017 Santa Run commercial directed by Petros Antoniadis: