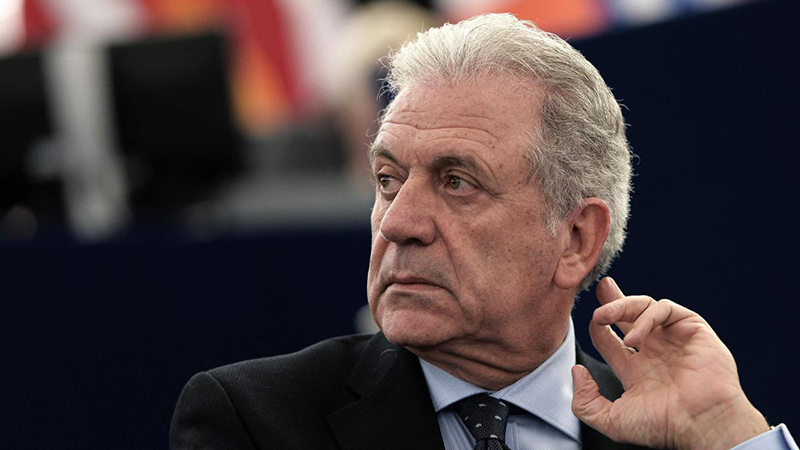 The deep political, economic and cultural divide between North and South in the EU has led to yet another feud – this time on the issue of refugee quotas for the EU countries.
Rivals from the two sides of the European Union’s migration dispute will meet in Brussels on Thursday in a goodwill gesture, after a duel on the issue between President of the European Council Donald Tusk and EU Migration commissioner, Dimitris Avramopoulos became public.
The EU has been unable to agree on relocation, something one senior EU diplomat likened to “fighting trench warfare” that has badly undermined member states’ trust in each other.
Right before the EU leaders’ summit in Brussels this Thursday and Friday, their chairman, Donald Tusk, reignited the dispute by coming out out strongly against “divisive” and “ineffective” obligatory quotas.
In an unusually public row between the EU’s Brussels institutions, the bloc’s executive arm, which has been a strong proponent of a mandatory and automated relocation, lashed out at Tusk.
The executive European Commission’s migration chief, Dimitris Avramopoulos, called Tusk’s intervention “simply unacceptable” and “anti-European”.
The disagreement between Tusk and the Commission translates into divisions between member states, casting doubt on whether they will be able to reach an agreement by their June target date.
Prime Minister Alexis Tsipras has called for a trilateral meeting with European Commission President Jean-Claude Juncker and German Chancellor Angela Merkel to discuss European Union-Turkish relations and the migration issue.
The meeting is expected to take place on the sidelines of the EU Summit, and is expected to also include Bulgarian Prime Minister Boiko Borisov. Italy, another southern EU country facing a refugee overflow, is also taking diplomatic action.
Prime Minister Paolo Gentiloni will talk to the leaders of Poland, Hungary, the Czech Republic and Slovakia in Brussels before all 28 EU leaders discuss migration over dinner.
The four eastern EU states have persistently refused to accept asylum-seekers to ease the burden on Italy and Greece, the other sea gateway to Europe, even at the height of arrivals in 2015, when more than a million people reached the bloc.
The easterners flatly reject any mandatory quotas on accepting people from the mainly-Muslim Middle East and Africa, saying that there are risks compromising their security after a raft of Islamist attacks in Europe since late 2015.
Sources: Reuters, AMNA