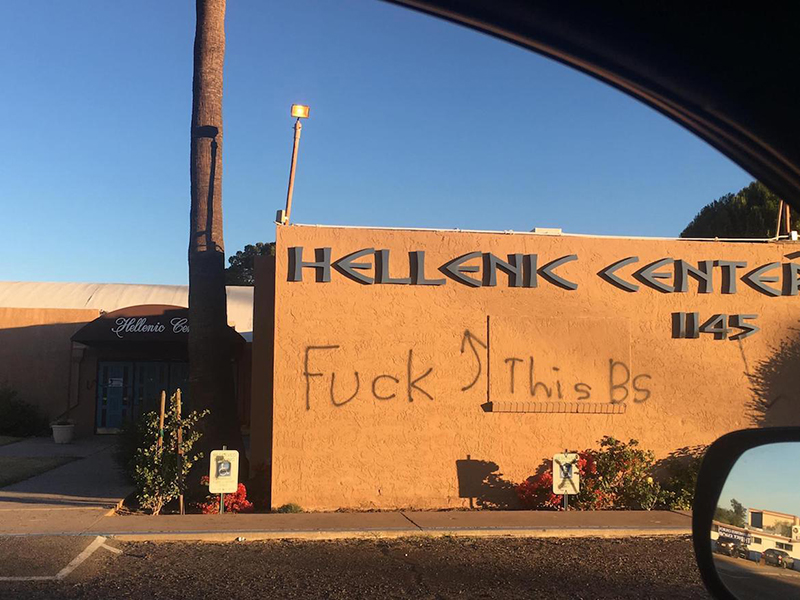 According to a The Pappas Post report, the Hellenic Centre at St. Demetrios Greek Orthodox Church in Tucson, Arizona, was vandalized with hate graffiti over the weekend.

An unknown perpetrator spray painted vulgarities directly under the name of the building. The incident was reported to the police. It is unknown if security or surveillance cameras captured the incident on tape.

The Pappas Post received the photo from a parishioner of the church who asked to remain anonymous, stating that “the hate is spreading like wildfire, we are going backwards in this country. I’m furious.”

In his message, he also noted, “We Greek Americans can not turn a blind eye to what is going on in this country, regardless of political affiliation. If we do, we have nothing to be proud about.”

“Simply stated, it is unacceptable, as are all forms of hate speech directed toward any individual, group, or community. Unfortunately, it’s an eerie reminder that the acts of bigotry, intolerance, and hatred experienced by our immigrant forebears still exist in today’s society. We call for the perpetrators of this terrible act to be brought to justice by the proper authorities.”