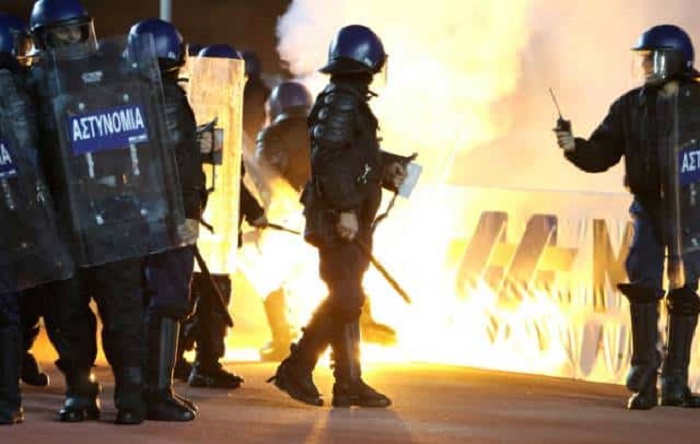 A football game in Limassol was interrupted for close to two hours on Monday evening after clashes between rival fans, which broke out after the injury of a ball boy by a firecracker.
The game between Limassol’s AEL and Nicosia side Apoel was initially interrupted in the 39th minute after visiting fans hurled a fire cracker, which injured a ball boy. The score at the time was 0-0.
The youth; reportedly belonging to AEL’s under-15 football team, was rushed to hospital but his condition was not immediately known.
The injury was followed by a rain of fire crackers and missiles hurled by Apoel supporters onto the pitch, forcing match official Demetris Mashias to interrupt the game and head for the dressing rooms.
The game restarted 30 minutes later, but was almost immediately interrupted again when rival fans invaded the ground and clashed on the track behind the south goal for a few minutes, amid a cloud of smoke from flares.
They dispersed after riot police intervened.
Mashias and the players returned to the dressing rooms for a second time with everyone expecting that it would be abandoned.
However, after over an hour, the game restarted, with most fans having already left. The final score remained 0-0.

There are more than ten Greek and Cypriot billionaires who are included on Forbes’ 35th annual list of the world’s wealthiest.
Australia