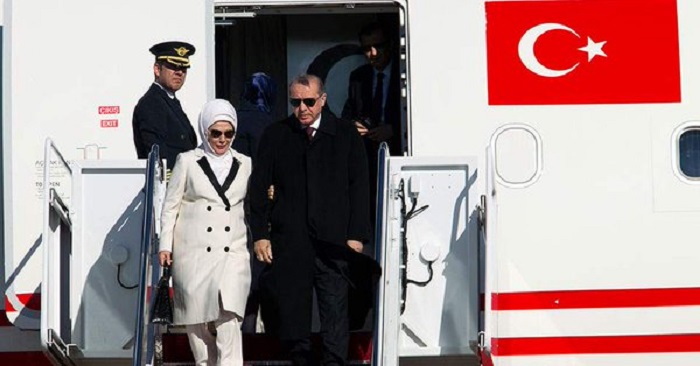 Turkish President Recep Tayyip Erdogan’s aircraft landed at Athens’ international airport on Thursday, at 10.42 am.
Foreign Minister Nikos Kotzias and his Turkish counterpart Mevlut Cavusoglu welcomed Erdogan and his wife at Athens international airport.
Erdogan is accompanied by government officials and Turkish businessmen.
His scedule in Greece is as follows:
-At 11:30, Erdogan will arrive at the Monument to the Unknown Soldier, where he will lay a wreath and will then continue to the Presidential Mansion where he will be received by Pavlopoulos and his wife Vlasia Pavlopoulou.
-At about 11:45 the official welcoming ceremony will start, followed at 12:00 by a private meeting between the two presidents. At 12:40, the meeting will be continued with the participation of the two countries’ extended delegations.
-At 13:30 Erdogan and his delegation will arrive at Maximos Mansion where he will be welcomed by Prime Minister Alexis Tsipras. A private meeting will follow with joint statements to the press at 14:50.
-At 16:30 Erdogan will meet the leader of the main opposition (New Democracy) Kyriakos Mitsotakis.
-The program for the first day will conclude with an official dinner in the Turkish leader’s  honour by Pavlopoulos and his wife at the Presidential Mansion at 19:25.
FRIDAY
-On Friday, Erdogan with his wife and the government delegation will travel to Alexandroupolis at 11:15, where they will be welcomed by Alternate Foreign Minister George Katrougalos and Deputy Foreign Minister Ioannis Amanatidis.
-At 12:10 he will arrive in Komotini, where he will visit the Kirmahalle Cammi and then at 13:30-15:00 he will lunch at the Chris and Eve Mansion Hotel.
-Erdogan’s visit will conclude at 16:00 with their flight back to Turkey.