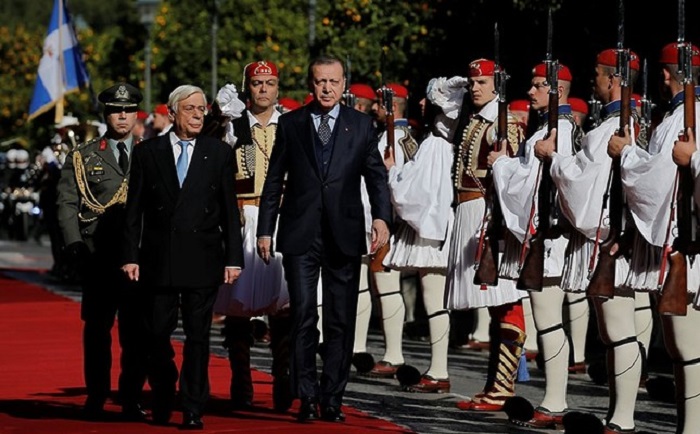 The visit of Turkish President Recep Tayyip Erdogan to Athens started in controversy as he clashed with his Greek counterpart Prokopis Pavlopoulos during introductory remarks at the presidential Palace in Athens.
In his welcoming remarks, Pavlopoulos made a point of rejecting Erdogan’s claims that the decades old treaty, establishing the current borders between the two countries, needs revision.
Pavlopoulos stressed that the Lausanne Treaty is non-negotiable. “For us, the Treaty of Lausanne is non-negotiable and does not need to be revised”, Pavlopoulos underlined to Erdogan.
On his part Erdogan reiterated his call to revise the treaty of 1923, citing conditions of the Muslim minority living Greece’s West Thrace.
“Muslims in [Greece’s] Western Thrace are not allowed to choose a mufti by their own community, efforts to appoint a mufti are ongoing; this is not the case for the Patriarchate in Turkey,” he said.
“You cannot find any discrimination against Turkish citizens of Greek origin while in Western Thrace, writing the word ‘Turkish’ is not allowed.”
Noting that the average income of Turks in Western Thrace is $2,200, Erdogan said: “Steps for investment, economic development are not taken, for this reason Lausanne Treaty should be updated.”
He also said that the European Court of Human Rights supported defining this minority as “Turkish” not just as “Muslims”.
On Cyprus he said that Turkey supported the Annan plan but Greek Cypriots opposed it. “Our aim is to find a viable solution in Cyprus and also in the Aegean”.
In a departure from the protocol, Pavlopoulos spoke again immediately after Erdogan repeating that international treaties are not revised.