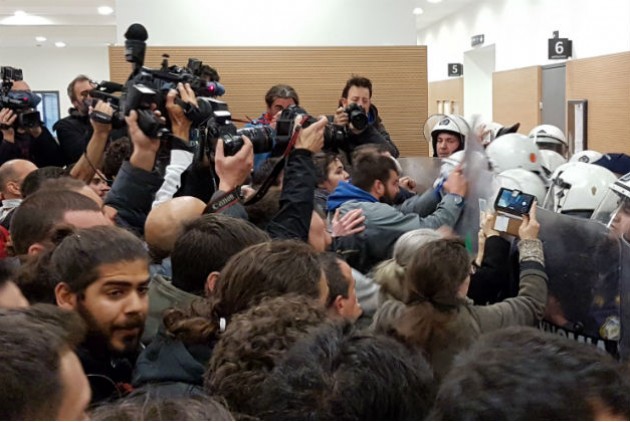 Ugly scenes of clashes between protestors and riot police in an Athens courthouse this week, returned attention to the long-running saga of home foreclosures in Greece.

A six-month deadlock been in place before Wednesday’s two e-auctions, amid moves to reduce Greece’s billions of euros worth of bad loans. Some Greek notaries have been on strike, and other planned sales have been suspended.

Pressure from Greece’s international creditors to move more quickly on the sale of repossessed properties is thought to be behind the latest attempt to push through the auctions, despite opposition from the left, and members of the governing Syriza party.

As teargas was used by police and fire extinguishers were let off by demonstrators angry at the e-auction, it conjured up images of earlier protests in other distressed EU states, and the lack of widespread opposition to such auctions in the U.S.

In Ireland, July 2013, a planned auction of repossessed homes was brought to a halt by angry protesters in Dublin. Auctioneers brought in from the U.K. were heckled as protesters urged potential buyers not to snap up cheap properties which had been taken from owners drowning in the crisis-hit economy.

In June the following year Irish police were called when members of the Land League – its name a throwback to Irish tenant farmers’ bitter struggles against 19th century landlords – protested at a hotel auction for 44 lots of repossessed properties.

In Spain recently, another country badly affected by the economic crisis, protests have repeatedly broken out at sales of foreclosed homes.

Although British firm MoveHub in 2016 identified both Greece and Spain as being in the top five of 33 countries surveyed for increasing house prices, Spain in particular has a glut of repossessed properties in the hands of banks, coming after a prolonged and ill-fated construction boom.

In the U.S. however, many such auctions are keenly attended, with some buyers going to extraordinary lengths to make a purchase. Earlier this month a judge jailed Californian Modesto businessman Andrew Katakis for 10 months for manipulating auctions of repossessed properties.

Although at the height of the crisis significant protests were seen in the U.S., such as in December 2011 when thousands of activists from the Occupy movement took over repossessed homes, since then, auctions have continued unmolested.

Indeed, foreclosures were recorded at a 10-year low in the U.S., down 70 percent from the height of the economic crisis in 2009, according to a report by ATTOM Data Solutions in January this year.

However, the U.S. government reported in June that foreclosures were again on the rise.

Back in Greece, more disputes over such auctions are likely. It is reported that 18,000 foreclosures are to be demanded next year, despite Greece’s moribund real estate market.

It was also reported earlier this week in local media that Greek banks would offer special loans to those considering buying repossessed properties.