Tsipras 'Knew from the Beginning' about Controversial Saudi Arms Deal 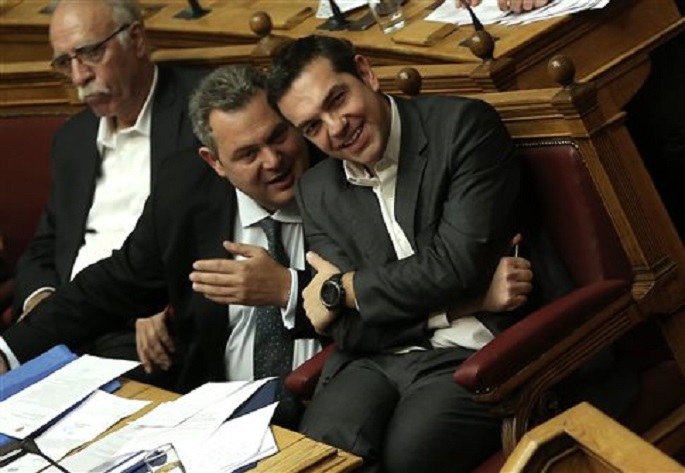 Greek Prime Minister Alexis Tsipras was aware of the proposed arms deal with Saudi Arabia from the beginning, according to leaked documents tabled in parliament by opposition MPs.
The controversial agreement was the subject of a heated exchange in parliament on Monday.
Opposition politicians charge the government of signed a deal with the Saudis through an intermediary, something which is prohibited by Greek law.
According to Ta Nea newspaper, that published the excerpts of the documents on Tuesday, Tsipras and Defence Minister Panos Kammenos agreed to proceed on the sale of excess 300,000 105mm missiles on 2 February 2017.
The decision bearing their signatures was sealed at a meeting of the Government Council for Foreign Affairs and Defence (KYSEA).
About 40 days later, at a new meeting of the KYSEA, on 17 March 2017, the agreement with Saudi Arabia was approved.
The document again bears the signatures of the Prime Minister and the Minister of Defence, and includes the full draft of the government -to- government agreement as an attachment.
The newspaper says that this draft was exactly the same document that was signed between Greek defence officials and the intermediary, Vasilis Papadopoulos, three months later.
Papadopoulos claimed that he represented the Saudis, a claim refuted by Riyadh.
The Greek ambassador in Saudi Arabia warned Athens on August 24, that the Saudis wanted a transnational agreement without intermediaries.
However, the Greek paper Ta Nea says that the government’s official response was that the deal was already completed by an “authorized” Saudi Arabian intermediary: Vasilis Papadopoulos.
Greek law enacted in 2011 prohibits intermediaries in defence procurement deals.