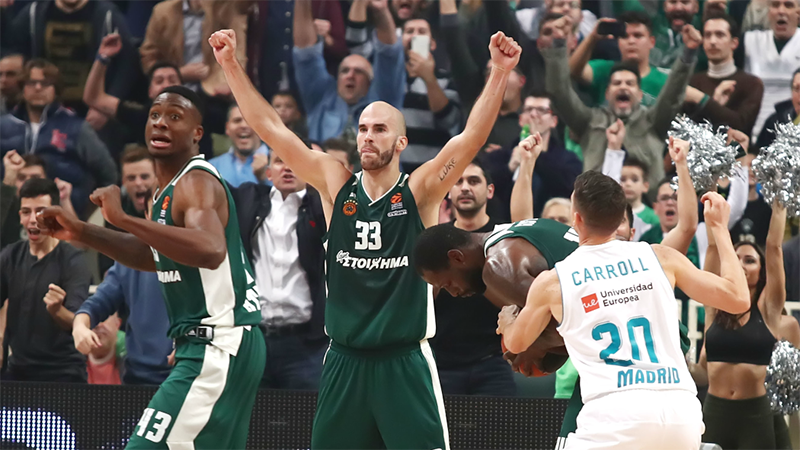 It was the second time Panathinaikos came from way behind to score an upset in this season’s Euroleague Basketball. After their win against Fenerbahce earlier in the month, it was Real Madrid’s turn to experience a home upset by the Greens.
In an outstanding thriller that literally went down to the final shot, Panathinaikos Athens rallied from a 16-point deficit (40-56) in the final 19 minutes to top Real Madrid 82-80 in the Olympic Stadium (OAKA).
With rush decisions both in defence and offence, Panathinaikos conceded 54 points in the first half and went back to the locker room with a 14 point deficit. After Real scored another basket in the start of the third quarter, the Greens started their epic comeback.
Allowing the Madrid side a mere 26 points in the second half, the Athens side came back to take the lead a couple of times in the last 5 minutes. Still it all came down to the wire – a couple of great defences, a gutsy three-pointer by Pappas and a pair of free shots by Gist.
POint guard and usual buzzer-beating “suspect” Nikos Pappas scored a crucial 3-pointer less than 20 seconds to the end to give Panathinaikos another lead (80-78).
American power forward James Gist drew a foul and was perfect from the line for an 82-80 lead with 15.5 seconds left, and Thompkins missed from downtown at the buzzer. By adding energy, slam dunks and great defences to the squad, Gist was voted MVP of the game.
After nine games in the season, Panathinaikos improved to 6-3 and remained undefeated at home with 4 wins in a row, while Real Madrid dropped to 5-4.

Madeleine McCann Investigators “100% Sure” Their Suspect Killed Her