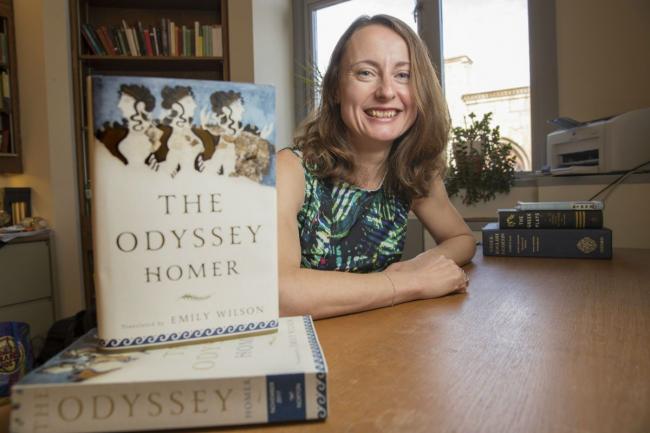 Classicist Emily Wilson, is the first woman who has translated ‘The Odyssey‘ by Homer, giving a fresh approach to the text, as New York Times critic Wyatt Mason wrote.

“Wilson has made small, but it turns out, radical changes to the way many key scenes of the epic are presented,” Mason wrote.

According to the critic, Wilson wrote a translation of a text that she believes “has through translation accumulated distortions that affect the way even scholars who read Greek discuss the original.”

Professor of Classical Studies and chair of the Program in Comparative Literature and Literary Theory at the University of Pennsylvania, Wilson, has been praised for preserving the musicality of the poetry using an iambic pentameter and for having the confidence to move away from previous interpretations written by men.

In discussing the word “polytropos” (πολύτροπος in Greek), the first description of Odysseus, Wilson explains about her translation that “The prefix poly means ‘many’ or ‘multiple.’ Tropos means turn. ‘Many’ or ‘multiple’ could suggest that he’s much turned, as if he is the one who has been put in the situation of having been to Troy, and back, and all around, gods and goddesses and monsters turning him off the straight course that, ideally, he’d like to be on. Or, it could be that he’s this untrustworthy kind of guy who is always going to get out of any situation by turning it to his advantage. It could be that he’s the turner.”

There is an excerpt in Paris Review with the opening lines of Wilson’s translation:

Tell me about a complicated man.
Muse, tell me how he wandered and was lost
when he had wrecked the holy town of Troy,
and where he went, and who he met, the pain
he suffered in the storms at sea, and how
he worked to save his life and bring his men
back home. He failed to keep them safe; poor fools,
they ate the Sun God’s cattle, and the god
kept them from home. Now goddess, child of Zeus,
tell the old story for our modern times.
Find the beginning.

About her approach to the text, the translator told The New York Times: “I want to be super responsible about my relationship to the Greek text. I want to be saying, after multiple different revisions: This is the best I can get toward the truth.”