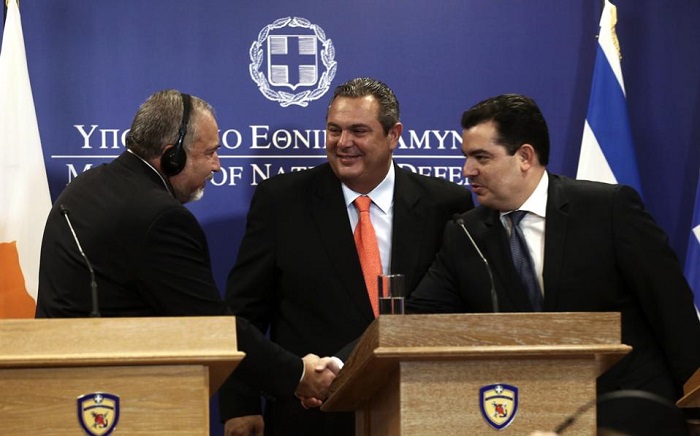 The defence ministers of Greece, Israel and Cyprus met in Athens on Tuesday to discuss strengthening cooperation to promote security, stability and peace in the Eastern Mediterranean.
It was the first-ever trilateral defense summit between the three countries.
Greek defense minister, Panos Kammenos, said the three countries were determined to maintain and broaden “an arc of security and prosperity,” noting that volatility in the region must be tackled collectively.
Israeli Defense Minister, Avigdor Liberman, noted that “The cooperation between the countries, which began in 2009, is growing in a wide range of fields. Greece, Cyprus, and Israel share common values as democratic countries and face similar security challenges.
“The cooperation is intensifying every day on many levels, based on the understanding that we must take our fate into our own hands ” Liberman said.
His Cypriot counterpart, Christoforos Fokaides, said that “our vision is to gradually turn the wider region from a conflict zone to an area of peace, stability and cooperation.
“The path we embarked on today will prove particularly beneficial for our three countries and will highlight the fact that threats and tension have no place in this region today,” he added.