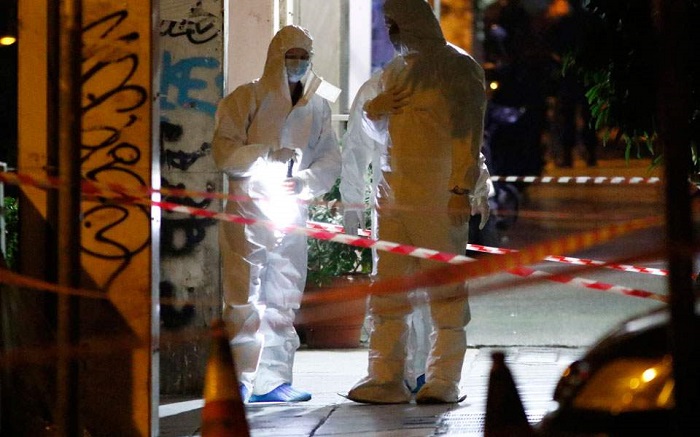 Greek police believe that the terrorist group “Revolutionary Self-Defense” was behind Monday’s attack against police, who were guarding the offices of PASOK, in central Athens.
According to preliminary ballistic results conducted by the Criminal Investigation Directorate, the weapon used was a 7.62 mm Kalashnikov automatic rifle.
The same weapon was used in attacks in April 2014 and in January 2017 against PASOK headquarters, and Revolutionary Self-Defense had claimed responsibility for those attacks.
“A miracle I survived”
In his testimony, one of the police officers guarding the headquarters on Monday evening said that the assailant “wanted blood…his aim was to kill”.
He said that he saw a tall, hooded man wearing black clothes approaching the building, who was carrying a rifle.
“Before I could figure out what was going on, I heard the shots fired and I fell down on the sidewalk to protect myself. When I got up, I saw the bullet hole on the wall, at the same height that my head would have been. It is a miracle that I survived,” he told Greek media.