Congresswoman Tulsi Gabbard (HI-02), a member of the House Foreign Affairs Committee, traveled to Greece in September, just prior to her official trip to Armenia with Congressman Frank Pallone (D-NJ).

While in Greece, Rep. Tulsi Gabbard met with Greek Government officials and religious leaders, organized by the U.S. Embassy in Athens and the American Hellenic Council. This was the Congresswoman’s first trip to Greece since being elected to office in 2013, which allowed her the opportunity to see first-hand the ongoing humanitarian crisis facing the country, as well as the chance to discuss with Greek officials a large range of issues of mutual interest. 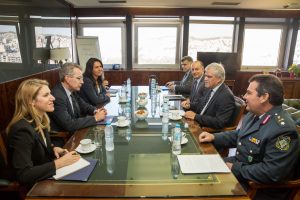 “The trip was planned, relatively, on short notice and I was only there for less than 48 hours, but we were able to get a lot done in that short period of time”, said Rep. Tulsi Gabbard in an exclusive interview with AHC Executive Director, Ioannis Fidanakis, upon her return to the United States. The full text of which can be found below.

My interest in going to Greece was really centered on the ongoing refugee crisis. Obviously, there are other issues that we were able to talk about and cover as well. I met with our U.S. Ambassador to Greece, Geoffrey R. Pyatt, and the Minister of Citizen Protection, Nikolaos Toskas, and we covered a broad variety of issues pertaining to the different threats and challenges that the Greek people are facing, as well as opportunities to strengthen the relationship between the United States and Greece.

In the past few years, there have been historic levels of bilateral cooperation between Greece and United States, especially in the area of counterterrorism. The fact that there have not been any serious incidents of terrorism on Greek soil is a strong testament to the work we are doing, but obviously serious concerns and areas of improvement still exist. Minister Toskas shared with us the need to remain ever vigilant, as some terrorists may attempt to exploit the refugee crisis for their own objectives. He also expressed concern about the geopolitical instability that comes with sharing a border with Turkey, especially due to Turkish President Erdogan’s recent belligerent actions.

I also had the privilege of meeting with religious leaders in Greece, such as Metropolitan Gabriel of Nea Ionia and Philadelphia and Father Antonios Maalouf. Metropolitan Gabriel shared with me about the humanitarian work he’s been doing to serve the refugee population, and to try to fill the gaps in aid and services wherever possible.

Father Maalouf, a Greek Orthodox Syrian, was a good example of a grassroots leader who is taking action in his own community to help those in need.  He opens up his Church daily to provide hot meals to Syrian refugees, and to provide clothing and other basic necessities.

Later, we visited the Impact Hub in Athens to experience firsthand the different social entrepreneurship opportunities that exist for young Greeks, and how they are empowering the millennial generation, in particular, to be self-starters and entrepreneurs – a key component needed to strengthen Greece’s economy for the next generation. The Impact Hub provides them with important resources, tools, mentorship, and networking opportunities to set young leaders up for success. I also met and heard from refugee children from places like Afghanistan, Pakistan, and Syria who were at Impact Hub for music and singing lessons.

Lastly, we visited the Eleonas Refugee Camp and spoke with some of the social workers and aid providers who have been working in the camp for quite some time. They shared about some of the progress being made, as well as the challenges that they confront within the community, and how they are continuing to try and provide better services to help refugees achieve some level of stability and normalcy in their lives.

Unfortunately, there is not one single place or cause that this crisis can be attributed to. I was interested to hear from those that are on the front lines working in these refugee camps. They talked about how they have people coming, not just from countries where there is an active ongoing conflict, but people from Pakistan, North African countries, and many other places in the region.

With that said, there is a lot more that the United States and the European Union can do to provide assistance and help with these humanitarian crises, both in Greece and in other parts of the world. But the most important thing we must do is to end the wars that are creating these refugees and causing people to flee their homes. I have been a strong advocate for ending the counterproductive regime change war in Syria that has caused so much loss of life and destruction, with many people being forced to flee their homes.

One immediate solution that we can take that would impact Syria, Yemen, and a number of these different conflicts that are causing humanitarian crises would be passing my Stop Arming Terrorists Act legislation, which would prohibit any U.S. taxpayer dollars, directly or indirectly, from going to fund terrorist groups like ISIS, Al-Qaeda, and those armed militants that fight alongside them. I’ve heard from many Syrian people that they would love nothing more than to go home, to get back some sense of normalcy and return to the country that they love and call home. That is why I’m calling on Congress to pass my bill because it will have a direct impact on this problem that we are facing.

First, one of the major takeaways from my visit to Greece was the strength of the U.S.-Greece partnership. In almost unprecedented ways, the United States and Greece are working together for the security of the region, which has benefited both Greece and the United States’ shared interests of security, stability, and peace in our home countries, and in the region. With that said, we are clearly facing many difficult challenges.  It’s important that we continue to support and strengthen our relationship with Greece and to find other ways and opportunities to expand and increase our partnership.

Turkey holds a major presence in the region. I’ve been an outspoken critic of President Erdogan’s actions and the dangerous direction he is taking his country. For example, Turkey is responsible, along with countries like Saudi Arabia, Qatar, and the United States, for providing direct and indirect support to terrorist groups like al-Qaeda and ISIS, and to armed militants who are fighting alongside them and under their command, in places like Syria and Yemen.  This is absurd and it must end.

There are a lot of changes that I think are important to be made to U.S. foreign policy. My bill, the Stop Arming Terrorists Act, is an important first step towards ending the destructive interventionist regime change war policies that our country has held onto for far too long. We need to focus on actually defeating those who pose a threat to us – terrorist groups like ISIS and al-Qaeda – not continuing policies that result in strengthening these terrorist groups. Again, I think there are a lot of opportunities and shared interests between the United States and Greece and we should further explore ways to collaborate that will result in defeating terrorist groups that threaten us and create more long-term stability within the region.

I’ve signed on as a co-sponsor to House Resolution 220 which recognizes and condemns the Armenian, Greek, and Assyrian Genocide. It is unconscionable that the United States has not formally done this yet. My home state of Hawai‘i, along with 46 other states, have already passed resolutions condemning this atrocity – it is long past time that the U.S. Congress and the White House do the same. I heard from descendants of those who survived the genocide and saw the pain in their eyes. It’s important for the world to recognize, acknowledge, and condemn this Genocide, otherwise, we will continue to see atrocities continuing, as religious minorities in different parts of the world are being targeted and killed, and the danger of history repeating itself increases.