TechNews
GreekReporter.com Greek News Culture Diogenes: The Ancient Greek Philosopher Who was the First to Give the...

Diogenes: The Ancient Greek Philosopher Who was the First to Give the Finger 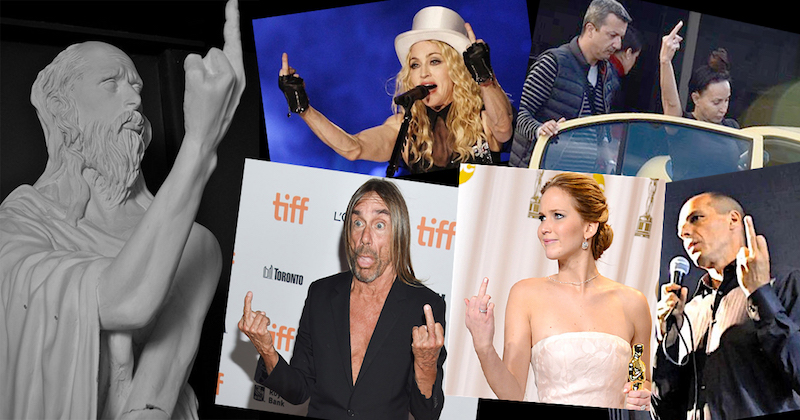 Diogenes the Cynic, the ancient Greek philosopher, was probably the man who invented “the finger” insult.
The historian of philosophy Diogenes Laertios wrote that the cynical philosopher Diogenes made the gesture to orator Demosthenes in the 4th century BC in Athens.
When people in an inn expressed their desire to see the great orator Demosthenes, Diogenes allegedly showed them the middle finger and exclaimed, “This, for you, is the demagogue of the Athenians.”
Even though the gesture has been used in ancient Greece, modern Greeks have “imported” the offensive finger gesture from Western cultures.
Only days ago, Vicky Stamati, the convicted wife of former defense minister Tsochatzopoulos – who serves a long prison term for substantial armament kickbacks – gave the finger to reporters. The incident became big news in mass media and went viral on social media.
One wonders what Diogenes the Cynic – known for his Spartan lifestyle – would have said about the woman who flaunted her (stolen) wealth when her husband was receiving the huge kickbacks and then played the role of the victim when convicted. He would probably be the one to give her the finger first.
“This is one of the oldest known offensive gestures,” says anthropologist Desmond Morris.
It shows the back of a closed fist that has only the middle finger extended upward, although in some areas the thumb is extended. Finger extension is seen as a symbol of contempt in various cultures, mostly Western societies.
“The middle finger symbolizes the penis and the curved fingers on both sides, the two testicles. By doing so, you essentially give someone an offensive phallic gesture,” Morris says.