GRNews
GreekReporter.comGreeceFlashback to the Funeral that Became the First Mass Protest Against the... 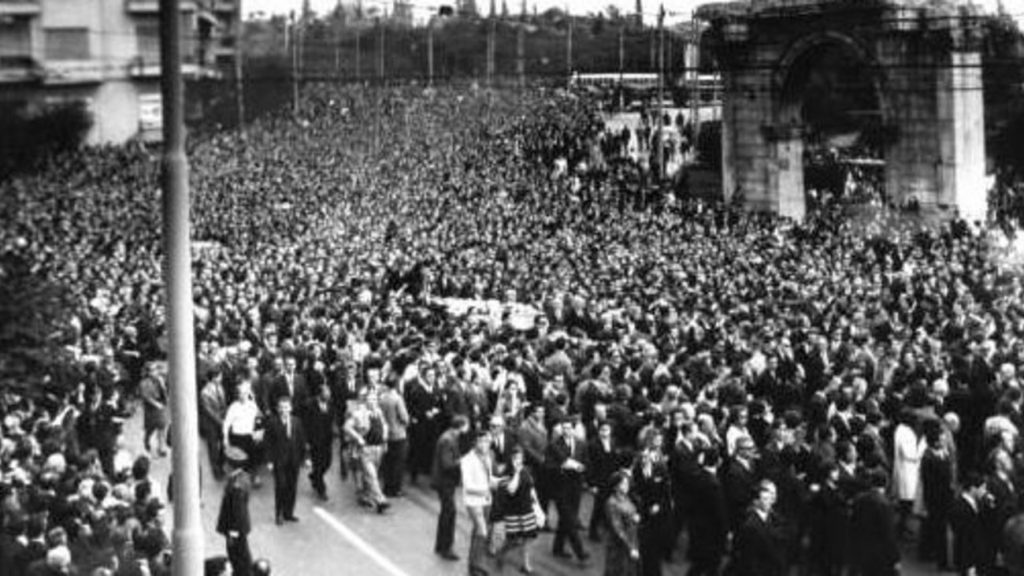 On November 1, 1968 the death of emblematic political leader Georgios Papandreou gave about 300,000 Greeks the opportunity to get out in the streets and demonstrate against the cruel dictators who had taken over the country on April 21, 1967.
The funeral of the “Old Man of Democracy” – as Papandreou is called to this day – two days later gave the colonels a taste of Greek people’s resentment.
Papandreou succumbed at Evangelismos hospital after hours of surgery at the age of 80. Before that he was under house arrest since the April 21, 1967 coup.
The news of his death was censored by the regime:
“Georgios Papandreou passed away at 2.20 am at the age of 80. His death was the result of cerebral thrombosis, which was impossible to be prevented by doctors. During his last moments Georgios Papandreou’s son Georgios was standing by his bedside. At three in the morning, the doctor of the former Prime Minister, Mr. Bakalos, announced: “At 2.20, the patient passed. Everything went well until 2.05, when a stroke occurred. Then, within 10 to 15 minutes, it was over.”
Greek newspapers were forbidden to publish the biography of the former prime minister, however, foreign news agencies and radio and television stations broadcast extensive reports, comments and information about the bustling life of Georgios Papandreou.
The wake and the funeral
The junta made every effort to underplay the event, but to no avail. At 9.30pm on the night of November 1, Papandreou’s body was transferred from Evangelismos Hospital to the chapel of the Metropolitan Church to be exhibited. The regime could not ban people from paying respects to the dead, as that would be against the Greek Orthodox Church. 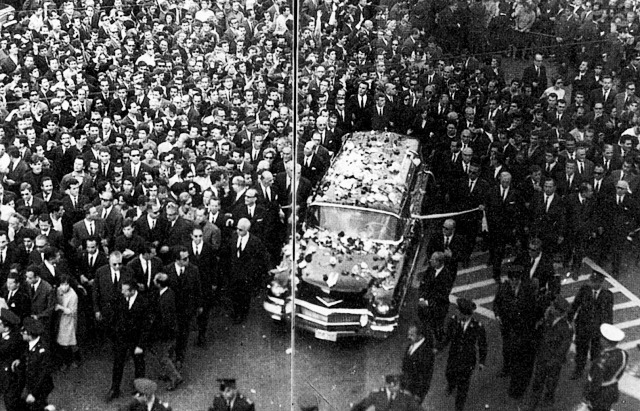 On November 2, foreign news agencies reported from Athens:
“Since early in the morning a respectful crowd that came to honor Georgios Papandreou for the last time, in the chapel of the Metropolis, constantly parades in front of his coffin. Calm and silent, the crowd, people from all walks of life, with the majority being young people and women excel, await in an endless line. Many hold  flowers that will be put on the coffin. Many with tears in their eyes.”
The number of mourners had the dictators worried and police issued a warning:
“The Athens Police Headquarters announces that, according to verified information, elements of the extreme Left, taking advantage of today’s funeral procession of the body of prime minister Georgios Papandreou, will attempt provocations and other defamatory acts that would mar the image of the country,” the statement said.
“Because the desecration of the sacredness of any religious ceremony or procession is highly contrary to Greek Christian traditions and our civilization in general, and therefore unacceptable, the competent authorities will take all legal measures to prevent any ugly act,” the warning continued.
The crowd did not budge
The regime warnings did not deter the crowd that gathered in the Metropolis area on November 3. The back of the passionate crowd was at Syntagma Square while all side streets around the Metropolitan Church were packed. Foreign reporters spoke of 300,000 people.
The crowd bid a brave farewell to the departed democratic leader. People were shouting without fear: “Democracy – Democracy”, “Papandreou – Papandreou”, “Freedom – Freedom”, “Immortal – Immortal”.
Foreign agencies reported: “Since the military coup of April 21, 1967, Greek people had lost all freedom of expression, both in written and oral terms. Today, however, people are demonstrating, taking as a symbol the old liberal leader, his denouncement of the military regime, his love for freedom, the hope of overcoming the “oppression”. The crowd shouted “Freedom,” but also “Down with the Junta”, “People will win” and “Democracy”. And as in all the great moments of their history, the songs, a legacy of their struggles for independence, were spontaneously expressed and repeated by thousands of lips.”
The funeral procession was like a huge human river. Thousands followed the coffin, shouting slogans. When the head of the procession reached the First Cemetery, its tail was in Filellinon Street, close to Syntagma Square.
Police were careful not to intervene – apparently afraid of violent reactions. They arrested 40 people who were shouting slogans around the cemetery. The detainees were led to the Emergency Military Court, and 36 of them were sentenced to imprisonment from 18 months to 4 years and 8 months.
The funeral of Georgios Papandreou was the largest anti-junta demonstration with the spontaneous participation of hundreds of thousands of people of all political affiliations.