Olympic Torch Handed Over to Pyoengchang for Winter Games 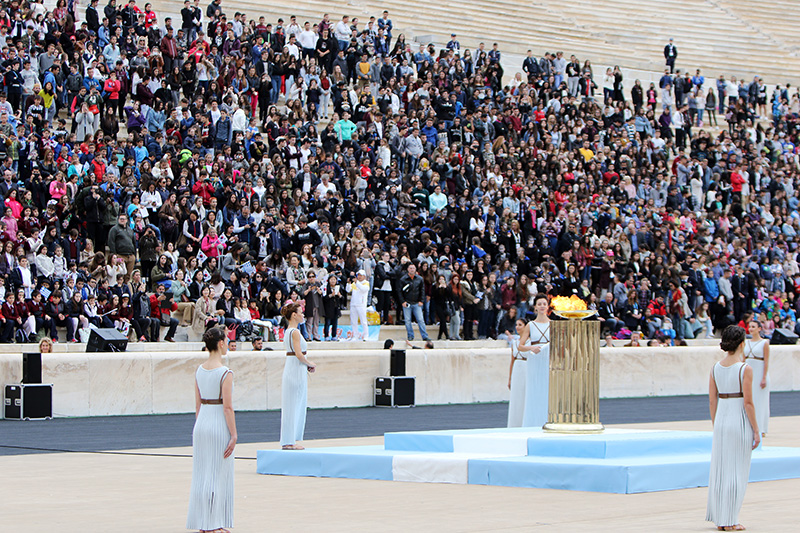 The Olympic torch was formally handed over from Greece to Pyeongchang 2018 Olympic Winter Games organizers on Tuesday, in a simple ceremony.
Under overcast skies at the Panathenaic Stadium that hosted the first modern Olympics in 1896, the torch was presented to South Korean President of the Pyeongchang 2018 Organizing Committee Lee Hee Beom, by the president of the Hellenic Olympic Committee, Spyros Capralos. Attending the handover ceremony was Greek President Prokopis Pavlopoulos.
“We are honoured that the Pyeongchang Winter Games represents the second time the Olympic Flame will be in South Korea, since the 1988 Seoul summer Olympic Games”.
“The slogan of the Pyeongchang 2018 Olympic Torch Relay, ‘Let Everyone Shine,’ means the Olympic flame will shine for each and everyone’s dream, passions and future anytime and anywhere,” Lee said.
He said when the Olympic flame arrives in South Korea ‘we also celebrate another milestone – 100 days to go until the start of the Olympic Winter Games in Pyeongchang’.
“The Olympic Torch Relay will be a very special journey that will shine throughout the host nation, for dreams and passion toward winter sports in Asia and beyond,” Lee added.
“The Olympic Flame is a strong symbol of tradition and values governing the Olympic Movement. It is a beacon for the Olympic values. It is the symbol of universal peace,” Capralos said.
The second to last torchbearer, Kim Ki-hoon, South Korean Olympic champion in short track speed skating, passed the flame to the last torchbearer, Greek skiing champion Ioannis Proios, who lit the cauldron, while thousands of spectators cheered.
The Olympic flame was lit in Ancient Olympia last week and embarked on a week-long 2,129 kilometres journey throughout Greece ending at Panathenaic (Kallimarmaro) Stadium.
Participating were 505 torchbearers, and 36 welcome ceremonies were held in 20 Greek municipalities during the eight days.
From Greece the flame will be flown to South Korea for a relay around the Asian country until the opening ceremonies at Pyeongchang on February 9. They will be held from February 9-25; only 80km from the heavily guarded border of the nuclear-armed North.
Source: AFP