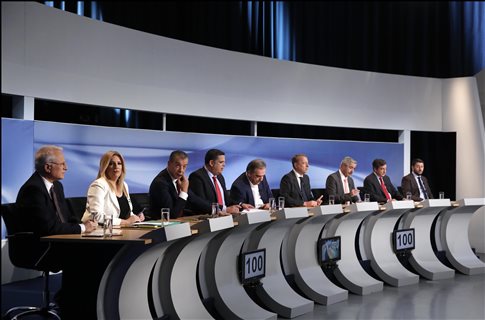 The nine candidates for the leadership of the new center-left party to be formed, presented their views on coalitions during their first public debate on national broadcaster ERT on Monday.
With the two major parties leading the race in opinion polls; albeit with a thin majority, it is very likely that the new party will have to cooperate with one of the majors. Regarding their willingness to go in coalition with either Syriza or New Democracy, the nine candidates replied as follows:
Nikos Androulakis
In the next election we will claim the best possible results. The second step is the program agreement. If we can find parties we agree with, we will go ahead and form a coalition, otherwise we will stay in the opposition.
Giorgos Kaminis (Athens Mayor)
Collaborations between parties are always done on a program basis. The winning party will have to come to us and asks us to collaborate. The best system is the German system, as it combines many advantages.
Yiannis Maniatis
I refuse to accept this possibility and the Greek people will refuse too. We will not be encroaching on preferential procedures. We will have a clear progressive governance program and the other parties will tell us if they want to work with it or not.
Dimitris Tziotis
My vision is the co-operation of all left-wing forces
Constantinos Gatsios
We do not want to cooperate with clueless Syriza, nor with the clientelist system of New Democracy. We want an electoral system that will produce stable governments.
Apostolos Pontas
We want a big political front with modern tools for modern solutions. The future of governance is in cooperation of political forces. I also believe that a party should have 5 percent of the vote to get in parliament.
Stavros Theodorakis (To Potami leader)
There is no Syriza and New Democracy but Syriza-Anel. I do not have much in common with this political monstrocity. I will work with any forces that want to change the bill of the proportionate vote, a bill that will lead to the dissolution of the country.
Fofi Gennimata (PASOK leader)
The country needs political stability. Are Syriza and New Democracy prepared to contribute to political stability? We have tabled a comprehensive proposal.
Yiannis Ragousis
We should not give a vote of confidence to New Democracy, nor to Syriza. We should not be interested in getting ministerial positions. This does not bring us close to the citizens.