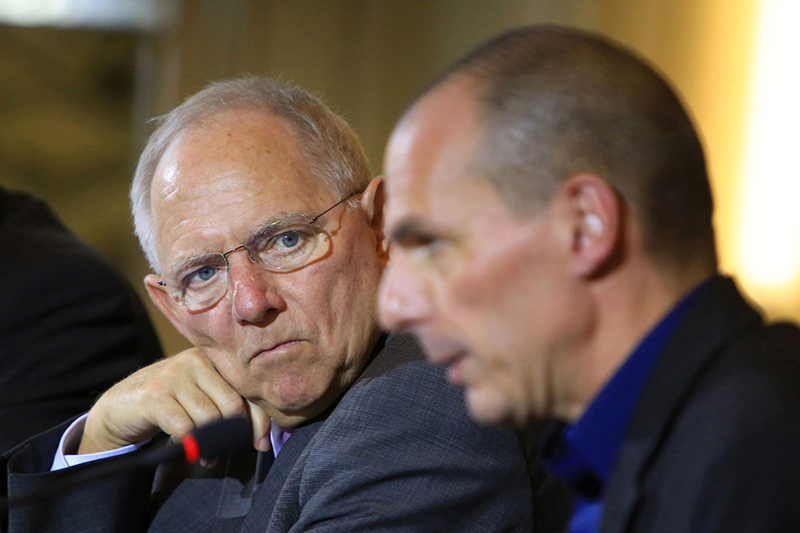 Former Greek Finance minister Yanis Varoufakis is notorious for challenging EU officials over the Greek bailout programme and Wolfgang Schaeuble‘s interview on Skai TV last night opened another chapter in the public duel between the two men.
In an open message to the former German finance minister posted on his blog, Varoufakis challenges Schaeuble to prove that what he wrote in his book “Adults In The Room” about the 2015 negotiations on the Greek bailout programme, is wrong.
His message comes hours after Schaeuble’s exclusive interview on Greek TV channel Skai, where asked about Varoufakis’ “revelations” about the negotiations, said “what he is saying is so far from reality, that I can’t seriously deal with it.”
Varoufakis’ public response on his blog is an open “invitation” to the former minister (and next Bundestag speaker) to prove the book’s revelations are wrong. He writes:
Dear Wolfgang,
I read carefully and listened your recent statements in response to journalistic questions emanating from my recent book “Adults in the Room” relating to our conversations during the first half of 2015.
I have a proposal for you. Instead of vague statements and personal put down lines, I invite you to point out specific pages and paragraphs in my book where I misrepresented something that you told me during that period (e.g. your expressed view that the 3rd Greek Loan and accompanying Memorandum of Understanding that I refused to sign, and which was signed after my resignation, would be bad for Greece; or, even more strongly, your view that, had I signed it, I would have to answer to my people).
Sincerely
Yanis Varoufakis